GUARDIANS Muscle SHERIFF and BABY Out of Town 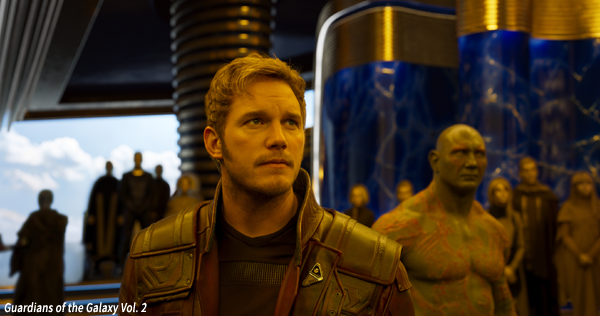 In the midst of several holidays, business blew up to 3.24 million admissions over the early May weekend as three new titles in particular fought a close battle for first place. Hollywood releases commanded 58% of the market, leaving local titles with 40%.
Coming in at number one was Guardians of the Galaxy Vol. 2 with a sturdy 884,000 viewers (USD 6.86 million) and already 1.72 million spectators (USD 13.09 million) since its Buddha’s Birthday debut on Wednesday. This was an enormous increase over the first entry, which only managed 1.34 million admissions during its whole run. The Marvel brand continues to dominate in Korea and this latest entry is enjoying strong feedback from moviegoers.
Not far behind in second place was local comedy-thriller The Sheriff In Town, which debuted at third on Wednesday and topped the chart on both Saturday and Sunday. The Lotte Entertainment title sold 834,000 tickets (USD 6.12 million) over the weekend and has recorded 1.26 million entries (USD 9.06 million) in five days.
Coming in at third just a little further behind with 765,000 sales (USD 5.3 million) was the Hollywood animation The Boss Baby. Clearly benefiting from the holiday-heavy week, the film has recorded 1.21 million admissions (USD 8.18 million) since Wednesday.
Down 43% in its second frame was CJ Entertainment’s The King’s Case Note, which added 295,000 viewers (USD 2.12 million) to give it a healthy total of 1.49 million admissions (USD 10.2 million). In week four, The Fate of the Furious decelerated 64% for 126,000 spectators (USD 937,000) and 3.59 million admissions (USD 25.94 million) overall. Despite a good start, The Mayor crashed 85% in its sophomore session, with another 90,000 tickets (USD 652,000) giving it 1.33 million entries (USD 9.06 million) in total.
Alien: Covenant gets an early Tuesday release due to Election Day, but all three chart toppers should remain competitive this week. Local period thriller The Tooth and the Nail is also scheduled for release.
Any copying, republication or redistribution of KOFIC's content is prohibited without prior consent of KOFIC.
Related Films Related Company