THE MAYOR Tops Polls in Week 1 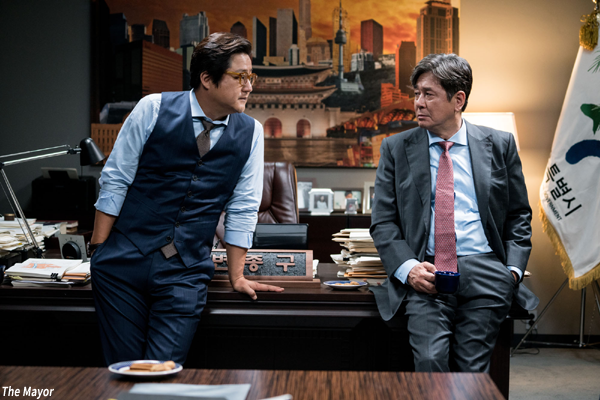 A pair of local new films lifted viewership 50% week on week during the last weekend of April, as 1.88 million tickets were sold during the sunny frame, two of which were snapped up for local films.
The week’s biggest new release was Showbox’s election drama The Mayor, featuring CHOI Min-shik as the Mayor of Seoul who embarks on a re-election campaign, which opened with 599,000 viewers (USD 4.39 million) over the frame and 904,000 spectators (USD 6.15 million) over five days. Coinciding with the presidential election season, which comes to a close next Tuesday, the film opened strongly on Wednesday, almost doubling the debut of The King’s Case Note.
However, the film has since lost ground and was only marginally ahead of its competition by Sunday and has already fallen behind on the reservations chart. Yet, with no less than four holidays over the next 9 days (Labor Day, Buddha’s Birthday, Children’s Day and Election Day) plenty more business should come its way.
After a slow start on Wednesday, CJ Entertainment’s period investigate comedy The King’s Case Note has gained momentum on the back of audience good will and was within striking distance of first place by Sunday. Over the weekend, the film sold 517,000 tickets (USD 3.75 million) and recorded 722,000 entries (USD 4.93 million) since Wednesday, a total it will add significantly to over the coming days.
Slipping to third place was The Fate of the Furious, cutting its take in half to 353,000 admissions (USD 2.62 million), giving it 3.2 million viewers (USD 23.22 million) in the tank to date. Fourth and fifth were also taken up by new entries, both aimed at children to capitalize on the holiday-heavy week ahead. Smurfs: The Lost Village debuted with 158,000 tickets (USD 1.05 million) and the new Ttobot film opened with 52,000 viewers (USD 361,000) and 57,000 entries (USD 397,000) over four days.
Guardians of the Galaxy Vol. 2 will take over pole position this weekend, while the two top local holdovers and new animation The Boss Baby will jostle for space in the busy spring holiday window.
Any copying, republication or redistribution of KOFIC's content is prohibited without prior consent of KOFIC.
Related People Related Films Related Company