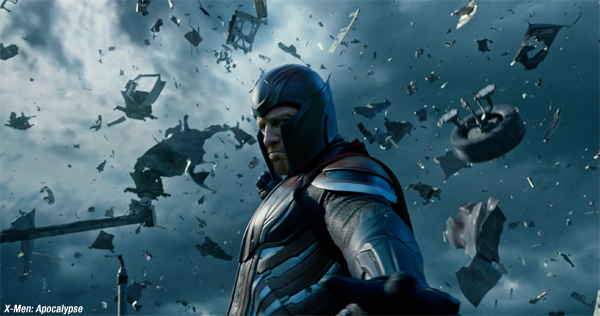 Following the dominance of local title THE WAILING, which has had an unusually strong showing for a Korean film in May, a new Hollywood tentpole has reclaimed the top spot at the box office as it continued its massive global rollout. At the end of the hottest May on record, 2.35 million tickets were shifted while the market share swung back in the US’ favor, to the tune of 60%.
X-Men: Apocalypse bowed with 1.17 million viewers (USD 8.6 million) in Korea, and 1.64 million (USD 11.44 million) over five days, a strong start but notably down from X-Men: Days of Future Past’s start two years ago. It was also the third best non-holiday opening weekend film for a 20th Century Fox film, their top title being the Korean production THE WAILING, which set the studio’s benchmark just two weeks ago. Despite the film’s lukewarm reception by critics and audiences in western markets, the film has proven more popular here, earning solid reviews and healthy viewer ratings, which may bode well for it in future weeks, though competition will be heavy.
NA Hong-jin’s surprise smash THE WAILING saw its take halved in its third week, as it brought in another 633,035 spectators (USD 4.47 million) to bring its total to 5.68 million (USD 38.87 million), easily making it the most successful title in the director’s career, eclipsing 2008’s The Chaser. It is now the third best-performing title by 20th Century Fox in the market, and should rise to second when it overtakes Kingsman: The Secret Service next week. Local competition from another big genre auteur (PARK Chan-wook) will likely hurt it next week but this domestic production has already proved bountiful for investor 20th Century Fox.
After a middling start, app-based film The Angry Birds Movie posted a slight 34% drop, drawing another 163,233 moviegoers (USD 1.06 million) to theaters for a fresh total of 448,998 admissions (USD 2.9 million).
Musical drama Sing Street continued to top the diversity chart, easing just 30% and adding 94,701 viewers (USD 684,028), which brought its cumulative total to 348,527 spectators (USD 2.4 million) in just two weeks.
Closing out the top five was local drama Canola, which dropped 53% in its second frame, with an 80,168 ticket (USD 527,315) outing lifting its total to 382,556 admissions (USD 2.45 million).
Though X-Men: Apocalypse will still be a large presence in the market, PARK Chan-wook’s Cannes competition title The Handmaiden easily topped the reservations chart early in the week and seems poised for a strong first place debut.
Any copying, republication or redistribution of KOFIC's content is prohibited without prior consent of KOFIC.
Related People Related Films Related Company