INSIDE MEN Breaks Out in Debut 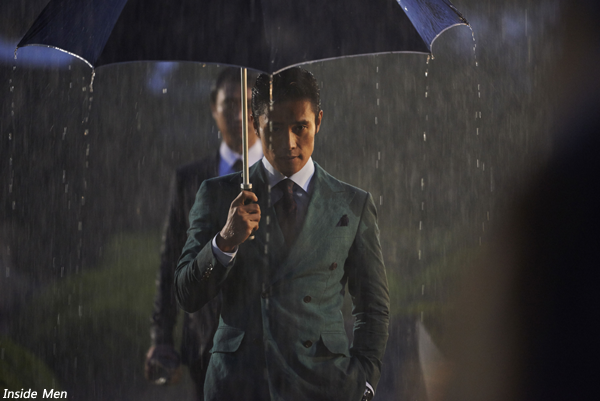 After a rocky track record at the box office throughout 2015, top Korean star LEE Byung-hun found himself convincingly shuffling back into the top spot with his latest release. Fuelled by strong local films, which accounted for 73% of the marketplace, and major Hollywood franchises, business was brisk in the lead up to winter, with 2.43 million viewers recorded in theaters over the frame.
Following the disappointments of local period action Memories of the Sword and Hollywood summer tentpole Terminator Genisys, LEE Byung-hun saw his latest film, the political fixer thriller Inside Men, shoot to the top of the box office chart. The WOO Min-ho (Man Of Vendetta, 2010) pic scored a robust 1.26 million admissions (USD 9.04 million) opening weekend, and 1.61 million (USD 11.34 million) since its soft opening on Wednesday. Strong user ratings should translate into some word of mouth, keeping the film alive until the next round of big releases hit in mid-December.
After two big weekends on top, exorcism thriller The Priests slid to second place after a 55% decline. Yet it was another good weekend with 487,681 tickets (USD 3.32 million) sold, giving it an impressive 4.45 million (USD 30.14 million) haul to date, the sixth highest total for a Korean film this year.
Less impressive was the opening bow of franchise finale The Hunger Games: Mockingjay - Part 2, which managed just 330,954 viewers (USD 2.21 million) in third place, down from the previous two installments. The film has brought in 438,699 spectators (USD 2.9 million) in five days and will struggle to come close to one million in total.
Meanwhile, Spectre, the 24th entry in the Bond franchise, fell a hefty 74% for 211,471 spectators (USD 1.48 million). The spy-action title has brought in 1.66 million admissions (USD 11.31 million) to date and is unlikely to threaten the final number of previous entry Skyfall (2012).
Hanging in there in fifth place was rerelease Eternal Sunshine of the Spotless Mind (2004), adding 30,775 tickets (USD 224,455) for a new total of 373,445 (USD 2.41 million).
More Korean hopefuls will be hoping to add to the streak of local successes when period drama THE SOUND OF A FLOWER and workplace comedy YOU CALL IT PASSION come out this week.
Any copying, republication or redistribution of KOFIC's content is prohibited without prior consent of KOFIC.
Related People Related Films Related News