Review of the First Quarter of 2015 Box Office 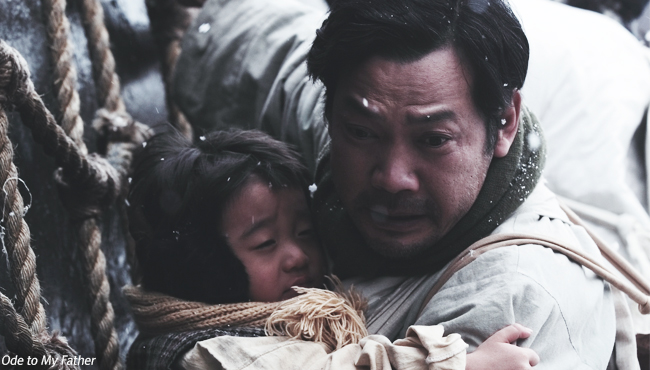 JK YOUN’s Ode to My Father, released on December 17th last year, surpassed ten million viewers in 28 days on January 13. The film was the 11th Korean film to cross the milestone and the 14th including foreign films. In addition, YOUN became the first director to cross the milestone for the second time after Haeundae in 2009, cementing his position as a commercially successful filmmaker. The film’s distributor and investor CJ E&M proved itself a leader in making seasonal hit films as both its Roaring Currents and Ode to My Father attracted over ten million audiences last summer and last winter, respectively.

Ode to My Father can be seen as a typical example of recent mega hits in Korea. Seasons are what matter the most, and lately, the Korean film market has been booming in the summer and winter vacation seasons rather than the traditional holiday seasons (Lunar New Year’s Day and Chuseok Holiday). Ode to My Father waited for the winter season, while its story and emotional elements defied generations, playing a key role in its appeal for audiences. Viewers in their 40s or older responded positively to the film and family audiences were also easy to find. Ideological disputes that erupted at the beginning of the release of the film fueled people’s interest in the long run. Word of mouth helped the film run longer in theaters. Fortunately, Ode to My Father did not have any formidable rival and CJ E&M’s powerful distribution power also played a key role.

Ode to My Father not only crossed ten million viewers but went on to surpass the 14 million viewer milestone (the second film to do so after Roaring Currents) by chalking up 14,070,981 admissions in total on February 22nd, the 68th day of its release. As of April 16, the film recorded 14,252,589 viewers in total, placed second behind Roaring Currents in the all-time Korean box office standings.

2. Business Slows Down in Theaters
Observing Korean theaters from January 1st to mid-April in 2015, they sold fewer tickets than the same period of last year. Some data during the first quarter of 2015 from the Korean Film Council shows that in the first quarter, the number of viewers slipped 7.5% to 50.48 million from the 54.56 million recorded a year earlier while sales inched down 2.7% to KRW 397.5 billion from KRW 408.4 billion. During the first quarter of 2014, Frozen became a huge hit, taking the lead during a boom in the theater industry. But in the same period of this year, no film performed to the same level.

In terms of market shares, Korean films accounted for 51.5%. The figure is a 2.4% increase over the same period of last year, when it was 49.1%. But the number of spectators slightly dropped to 25.97 million from 26.77 million. The numbers of viewers vary a great deal as different months fall in different seasons. In January, viewers of Korean films numbered 14.02 million thanks to the box-office success of Ode to My Father. But the figure plummeted to 8.05 million in February and 3.9 million in March, a traditionally slow season. The figures for January and March are over ten million apart. The numbers of viewers for foreign films were more evenly distributed. Viewers of foreign films numbered 8.47 million in January, 8.05 million in February and 7.42 million in March.

3. Disappointment of Highly Anticipated Films
Behind the glory of Ode to My Father was a darkness -- the poor scorecards of highly anticipated Korean films. Among Korean films that were released since January 1, 2015, five films drew over one million viewers. Among them, only Detective K: Secret of the Lost Island and Twenty obtained satisfactory results – 3.87 million admissions for the former and 2.8 million admissions for the latter. 2.19 million viewers went to Gangnam Blues which made headlines due to YOO Ha’s reputation for men’s films and popular idol LEE Min-ho who was cast as the hero. Love Forecast, which features the two young stars LEE Seung-gi and MOON Chae-won, accrued 1.89 million viewers. C'est Si Bon, a nostalgic film based on a true story drew a disappointing 1.71 million viewers.

4. Historical Film Flops
Although Ode to My Father, concerning modern Korean history, and Detective K: Secret of the Lost Island, a hybrid historical drama, scored successful box office runs, Gangnam Blues and C'est Si Bon, both of which dealt with Korean society in the 1970s, flopped. Chronicle of a Blood Merchant emerged as a highly anticipated film as it featured popular actor HA Jung-woo as a director and the lead character along with HA Ji-won, one of the top Korean actresses, and dealt with Korea in the 1950s just like Ode to My Father. But the film merely drew 960,000 spectators.

Empire of Lust also made front page news as a Korean equivalent of Lust, Caution but it flopped with a score of 470,000. So did The Royal Tailor, which hit screens last December and ran until early this year. The film drew only 790,000 viewers despite its super star cast and appealing theme. Historical films are very expensive to make in the Korean film industry, which has made filmmakers concerned about the situation.

5. Director IM Kwon-taek’s 102nd Film
Director IM Kwon-taek came out with his 102nd film Revivre. The film is based on a KIM Hoon novel which nabbed the LEE Sang Literary Prize and drew attention as a collaboration between Myung Film, a representative film studio in Korea, and the acclaimed director. The film received mixed reviews but nearly all agreed that director IM is still making ‘new films.’ It travelled to the Venice Film Festival and the Toronto international Film Festival.

6. Kingsman Puts Up a Good Fight
Among the films released in Korea this year, Kingsman: The Secret Service showed a much better-than-expected performance. Few thought that the film would draw 6.04 million spectators. The world box office in mid-April showed that the spy action thriller posted its third highest sales in Korea after the U.S. and China. Although the film had not yet landed in Japan, its box-office score in Korea outnumbered that of the UK or Australia. The biggest reason for the huge success of Kingsman in Korea is that its filmmaker made a fresh film in the spy action genre. Another reason is that Kingsman hit screens in Korea on February 11 at a time when Korean films were relatively weak.

The Imitation Game and Whiplash also recorded higher-than-expected ticket sales. The Imitation Game’s success demonstrated Benedict Cumberbatch’s strong fandom in Korea. Even though The Imitation Game was not a directly distributed film, it attracted 1.76 million viewers. Whiplash chalked up 1.54 million admissions despite being a diversity film. The film’s success indicates that so-called ‘diversity films’ are no longer relegated to the arthouse as they grow into the mainstream market. 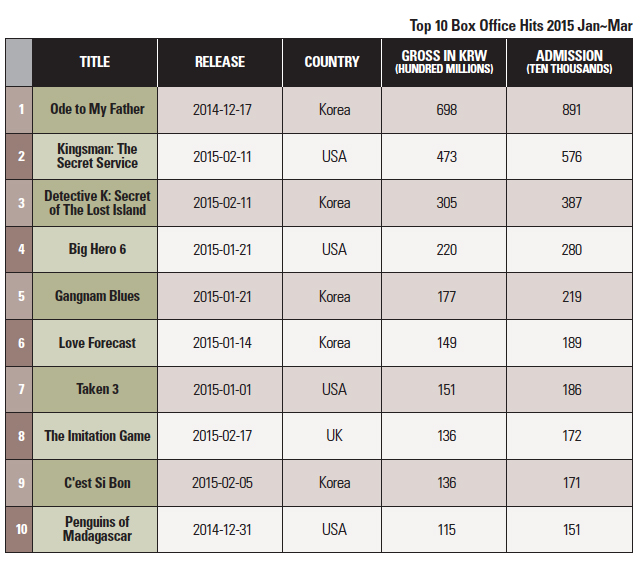