Oct 25, 2013
Korean cinema remained out front in the last two weeks, according to figures provided by the Korean Film Council’s statistics. Enjoying a 66.7% market share, local films occupied six of the top seven spots. Out in front was Hwayi: A Monster Boy, the long-awaited return of Save the Green Planet (2003) director JANG Joon-hwan. The thriller was first in the rankings and scored a 30% share by accruing 1.69 million admissions over the past fortnight. Starring YEO Jin-gu and KIM Yun-seok, the dark thriller tells the story of a boy raised by a group of five criminals who is faced with difficult moral dilemmas when he comes of age. The film got off to a good start with a 714,000 admissions and first place debut before seeing its take halved by the new blockbuster Gravity last weekend. 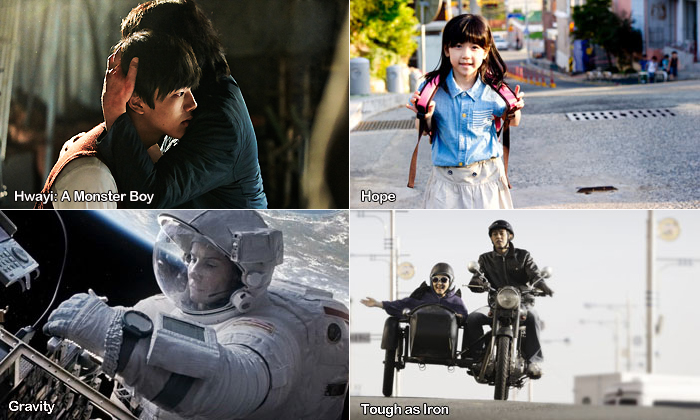 Staying in second place was the melodrama Hope, the return film of LEE Joon-ik, who retired briefly following the lackluster returns of his previous effort Battlefield Heroes (2011). The film, which stars SEOL Kyung-gu brought in 1.16 million spectators over the past two weeks. Hope has now almost reached 2.4 million admissions since its debut. Though it had a soft opening, it has demonstrated strong legs ever since, by dropping only 8% and 29% in its second and third weekends. Next week, Hope will have its international premiere as the opening film of the 8th Paris Korean Film Festival.
Stealing third place, though after only a week in theaters was the Hollywood event picture Gravity, from director Alfonso Cuaron. With massive reservations and a swell of demand for top dollar 3D and IMAX formats, the films just over one million admissions since its debut. However, due to higher tickets prices it has actually eclipsed Hope’s revenue share, despite only being on theaters for seven days. With reservations still over 60%, the film is poised to continue selling well over the coming weekend.
With 75% of the market between them, it was slim pickings for other films outside of the top three but a few a holdovers and some brand new releases nevertheless made their presences felt. Leading them at number four was Tough as Iron with another 242,000 admissions to bring its three-week total to 1.2 million.
Closely following it was period hit The Face Reader with 239,000, as it pushed its total over the nine million admissions mark. The HAN Jae-rim feature, starring SONG Kang-ho, LEE Jung-jae and KIM Hye-soo among others, has now eclipsed Iron Man 3’s total to become the third highest grossing film of the year. It remains to be seen whether or not it can catch up to second place, currently occupied by Snowpiercer’s 9.35 million total.
In sixth and seventh place, respectively, were the fresh runs of HA Jung-woo’s directorial debut Fasten Your Seatbelt, which has generated 231,000 ticket sales in a week, and the new KIM Min-jung romantic comedy Queen of the Night, which brought in 229,000 admissions in the same time frame.

Along with Gravity, Hollywood films took a 31.8% share of the market. Positions eight through ten on the chart were all occupied by tinseltown releases. The hit horror The Conjuring still managed to hang in there by adding another 122,000 admissions to its total, which is edging closer to 2.3 million. Following that was the Ron Howard sports drama Rush with 92,000 and the animated sequel Despicable Me 2 with 35,000. Though it will come close, it seems unlikely that the latter will cap the one million admissions mark.
Among limited releases, Woody Allen’s latest film Blue Jasmine, staring Cate Blanchet, has been performing very well as it added another 22,000 admissions to a total that has now topped 120,000 admissions. Meanwhile, HONG Sangsoo’s Our Sunhi, for which he earned the Silver Leopard at the recent Locarno International Film Festival, added another 5,000 admissions to bring its total to 67,000, his best performance at the box office HaHaHa in 2010.
By Pierce Conran 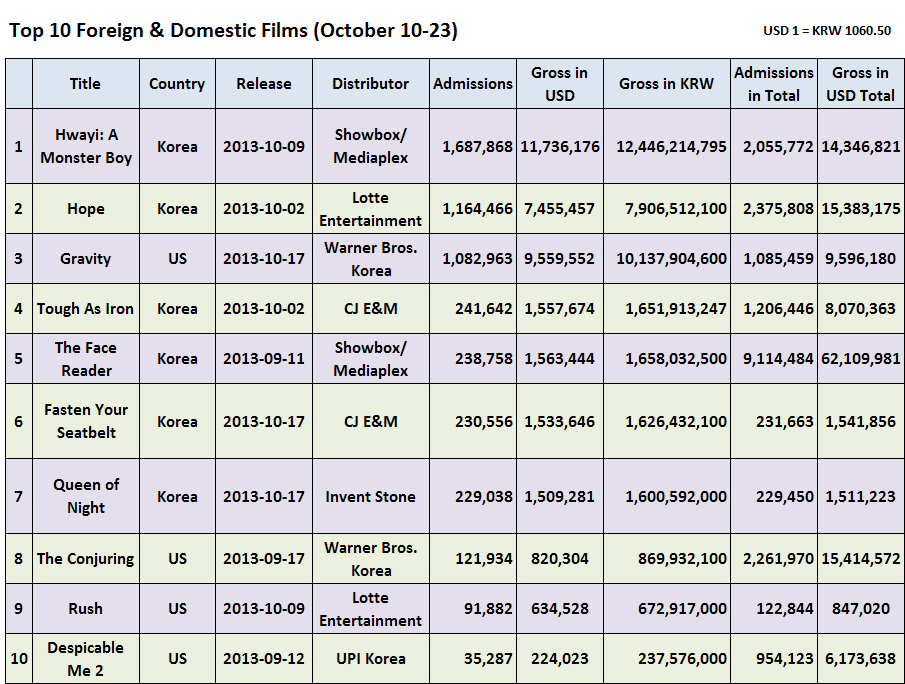