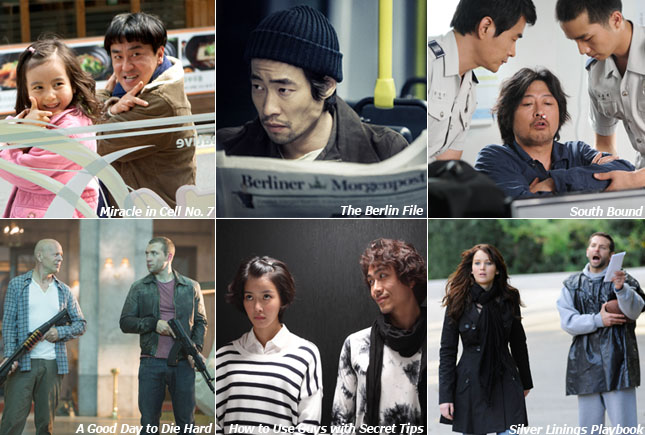 The runaway hit film Miracle in Cell No. 7 by director LEE Hwan-kyung continued to dominate the Korean box office in its third and fourth weeks on release. After briefly ceding the #1 slot to action blockbuster The Berlin File, the sentimental drama soon reclaimed its spot at the top of the chart, where it currently stands. The film actually sold more tickets in its third and fourth week (4.61 million)  than it did in its first and second week (4.59 million). It has now amassed a stunning 9.4 million admissions (~US$61 million), and in a matter of days it will become the ninth film in Korean history to break the 10 million admissions mark.
Sometimes compared to Hollywood movie I am Sam, Miracle in Cell No. 7 tells the story of a man with the mental capabilities of a six-year-old who is put into prison. Eventually, his cellmates cooperate to smuggle his young daughter into his cell. The film features an impressive ensemble cast with RYU Seung-ryong taking the lead role and PARK Shin-hye, JUNG Jin-young, OH Dal-soo, PARK Won-sang, KIM Jung-tae, JUNG Man-sik, and child actress GAL So-won all contributing strong performances.
The massive success of Miracle in Cell No. 7 somewhat overshadowed the strong performance of RYOO Seung-wan’s The Berlin File, which after three weeks on release has racked up a very impressive 6.2 million admissions. The film tells the story of a North Korean spy (HA Jung-woo) and his wife (JUN Ji-hyun) who get caught up in a web of intrigue involving a Pyongyang-based operative (RYOO Seung-bum) and a South Korean agent played by HAN Suk-kyu. The film has received particularly strong praise for its smoothly executed action set pieces.
Hollywood action franchise film A Good Day to Die Hard stands at #3 with 1.37 million admissions since its February 6th release. Also released on the same day was Korean film South Bound, based on a well-known Japanese novel. The drama about an eccentric family who decides to move to a remote island and drop out of mainstream society sold 750,370 admissions in two weeks. The film’s performance was certainly helped along in part by the popularity of its lead KIM Yun-seok. KIM has recently enjoyed an amazing run of box office hits including The Chaser (2008, 5.1 million admissions), Running Turtle (2009, 3.1 million admissions), Woochi (2009, 6.1 million admissions), The Yellow Sea (2010, 2.3 million admissions), Punch (2011, 5.3 million admissions), and The Thieves (2012, 13 million admissions).
Another Korean film placed at #5 in the chart. How to Use Guys with Secret Tips is a debut work by director LEE Won-suk, which sold a slightly disappointing 387,000 tickets in its first week. The film, which has received unexpectedly high praise from critics, tells the story of a young assistant director (LEE Si-young) whose life is a complete failure until she purchases a strange set of instructional videos titled “How to Use Men.” Thanks to the lessons in the videos, she catches the eye of a top star (OH Jeong-se) and eventually steps into the director’s chair herself.
Three children’s animated films made it onto the top 10 list this week, including The Snow Queen from Russia at #6 with 264,481 admissions; Korean film Pororo: the Racing Adventure at #8 with 183,670 admissions; and Marco Macaco from Denmark at #9 with 131,306 admissions. Hollywood action fantasy Hensel and Gretel: Witch Hunters failed to stir much excitement, placing at #7 with 241,561 admissions. Finally, Oscar nominee Silver Linings Playbook sold 91,773 admissions in its first week to just barely make the chart at #10.
Top 10 Foreign & Domestic Films (February 7-20)