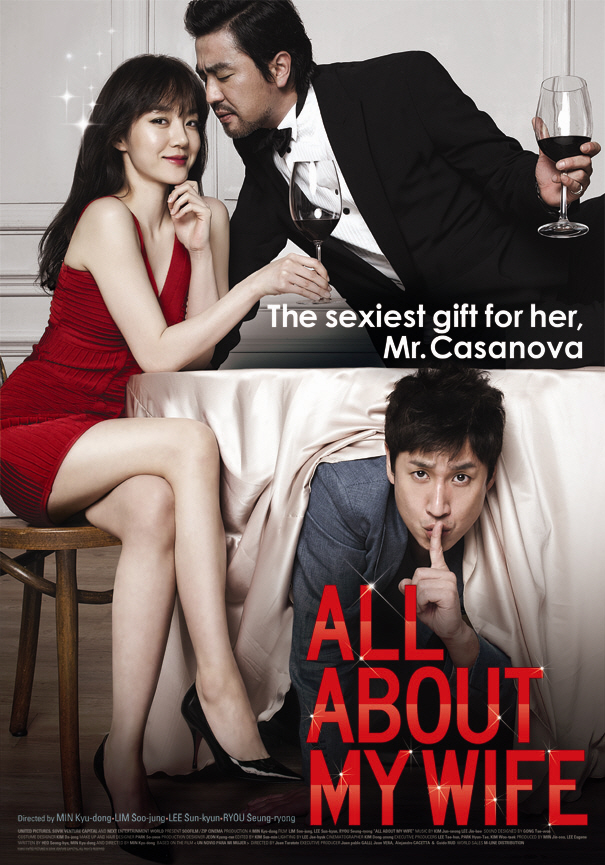 Hollywood blockbuster <The  Avengers> established its dominance over the Korean box office in the month of May, selling more than twice as many tickets as its nearest competitor. With 6.9 million tickets sold overall since its April 26 opening, the film now ranks as the best-selling release of the year.
However Korean cinema also produced a successful hit with the romantic comedy <All  About My Wife>. Directed by MIN Kyu-dong (<Antique>, <Memento Mori>), the film is a remake of a comedy from Argentina called <A Boyfriend for My Wife>. LEE Seon-gyun (<Helpless>) stars as a man driven to distraction by his wife, played by LIM Soo-jung (<Woochi>). When by chance he runs into a Casanova-like man (RYU Seung-ryong) with a seemingly unstoppable ability to seduce women, he offers to pay him to seduce his wife and provide grounds for a divorce.
Benefiting from positive word-of-mouth, the film opened with decent returns and maintained a consistently high score throughout the month of May, selling 2.3 million tickets. By mid-June the film had grossed over 3.5 million admissions, adding to a string of very popular local films from the first half of the year including <Dancing Queen>, <Unbowed>, <Nameless Gangster>, and <Architecture 101>.
Although not quite as popular, sports drama <As One> also turned in an impressive performance with 1.8 million admissions. The film by debut director MOON Hyun-sung is based on the real-life story about two women's table tennis players -- one from North Korea, one from South Korea -- who are brought together to play on the unified team for the 1991 World Table Tennis Championships. The dramatic story drew particular notice for its acting, with HA Ji-won portraying the South Korean HYUN Jeong-hwa and BAE Doona giving a highly memorable performance as North Korean player RI Bun-hee.
Coming in somewhat below expectations was <The Taste of Money>, the latest film from noted auteur IM Sang-soo. A continuation of the themes and settings he explored in his 2010 Cannes competition entry <The Housemaid>, this latest film was also invited to compete at Cannes, together with HONG Sang-soo’s <In Another Country>. Nonetheless, the festival invitation did not appear to give the film any long-term commercial boost. Although opening well in its first few days, thanks to an aggressive marketing campaign, the film strongly divided viewers and quickly lost momentum at the box office. By the end of the month, its tally was 1.1 million admissions, about half the final score of <The Housemaid>.
Two other Korean films that were released in April and March respectively also made their way onto the May box office top 10. <Eungyo> from JUNG Ji-woo, the director of <Happy End>, just managed to reach its breakeven point with an additional 700,000 tickets in May, bringing its overall total to 1.3 million admissions. The hit melodrama <Architecture 101> also continued its remarkable run, adding 440,000 admissions during the month to bring its total to 4.1 million tickets. The film now ranks as Korea's best-selling melodrama ever.
As for other Hollywood releases, <Men in Black III> opened strongly with just under 2 million tickets sold between its May 24 release and the end of the month. But Tim Burton's <Dark Shadows> and fairytale adaptation <Mirror Mirror> failed to stir up much interest, with both scoring slightly under 600,000 admissions.
Finally, among the films designated by KOFIC as small-scale specialty releases, David Cronenberg's <A Dangerous Method> scored highest with 25,285 admissions. Local documentary <Talking Architect> also continued to draw interest with an additional 7,465 tickets sold, ranking at #2 for the month. Its overall total is a very impressive 36,939 admissions. 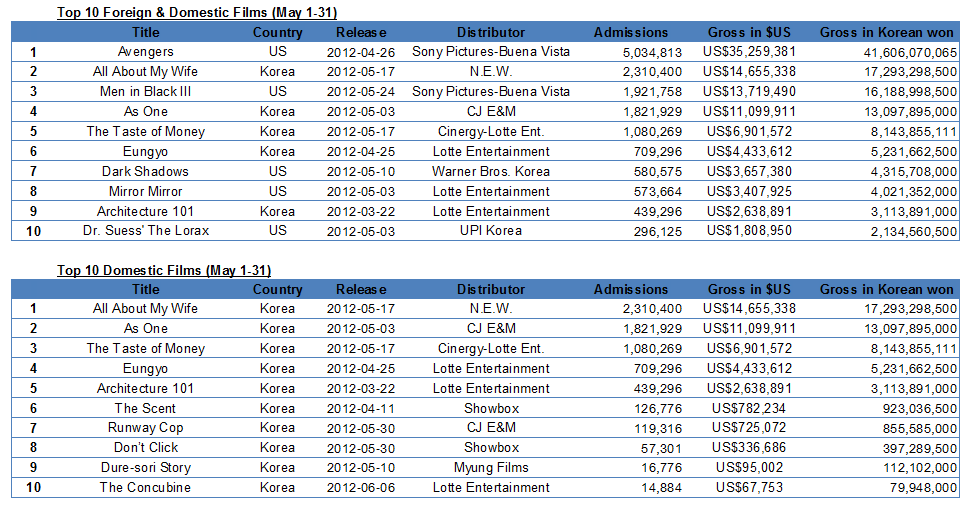