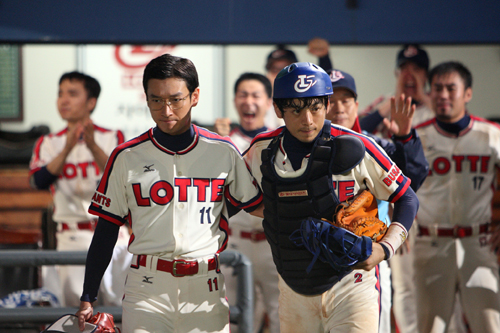 The past two weeks have seen little change at the box office, with comparatively few major releases taking place in the window between Christmas and the Lunar New Year holiday. <Mission: Impossible - Ghost Protocol> continues to dominate, accounting for close to a third of overall ticket sales. Its admissions total to date now stands at 6.45 million, making it one of the top five selling Hollywood films of all time in Korea, behind <Avatar> and the three <Transformers> movies.
Big-budget Korean war film <My Way> by KANG Je-gyu, in contrast, continued to lose momentum despite its record-breaking $25 million budget and pan Asian star casting. After three weeks on release, the film has sold 2.06 million tickets for co-distributors CJ E&M and SK Planet.
Korean baseball drama <Perfect Game>, which like <My Way> was released on December 21, has moved up slightly in the box office rankings for Lotte Entertainment, but its total score remains at 1.22 million admissions.
The best performing film to debut in the past two weeks was the Korean romantic comedy <Love On-Air> (a.k.a. “Wonderful Radio”). Directed by KWON Chil-in (<Singles>) and featuring rising star actress RHEE Min-jung, the film centers around the relationship between a radio DJ who used to be a famous singer and her new, bad-tempered producer. Although not favorably reviewed, the Showbox release is off to a respectable start with 468,000 admissions in six days.
Finally, although it ranks at #15 in this latest chart, the box office performance of KOREEDA Hirokazu’s <I Wish> is drawing increased notice. For the past three weeks, the Japanese film has ranked #1 among specialty releases in Korea, bringing its total to an impressive 24,635 admissions. With word-of-mouth strong and no signs of slowing down yet, the film looks certain to pass <Nobody Knows> (30,000 admissions) to become Koreeda’s best-selling release in Korea. The film co-stars ODAGIRI Joe in a story about a family separated by divorce, and the efforts of the two young sons to take a high-speed train and reunite for a day.
Any copying, republication or redistribution of KOFIC's content is prohibited without prior consent of KOFIC.
Related People Related Films Related Company