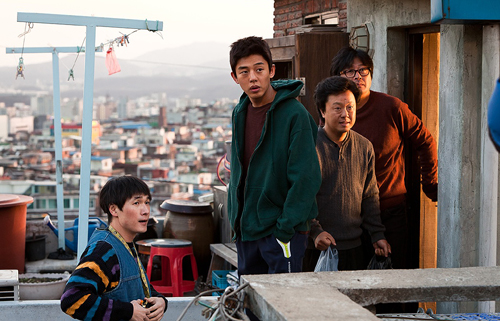 <Punch>, based on a local novel, is the movie of the moment in Korea, having earned roughly US$11 million over the past two weeks. A character-centered drama about a high school boy and his eccentric teacher who lives next door, <Punch> has enjoyed positive word of mouth thanks to strong acting by the leads YU Ah-in and KIM Yun-seok, and an interesting cast of supporting characters. Another hit film from CJ E&M on the heels of <Silenced>, the film directed by LEE Han has sold 1.7 million tickets to date, and so far shows no signs of slowing down.
<Punch> sold twice as many tickets as the next highest grossing Korean film, Busan International Film Festival (BIFF) opener <Always>, distributed by Showbox / Mediaplex. Featuring popular stars SO Ji-sub and HAN Hyo-joo, the film by SONG Il-gon has sold roughly 800,000 tickets since its Oct. 20 release. The film is loosely based on Charlie CHAPLIN's <City Lights>, and is about the relationship between a former boxer and a blind woman.
Another high-profile film that premiered in Busan is <A Reason to Live>, from director LEE Jeong-hyang who scored a major hit with the coming-of-age drama <The Way Home> back in 2002. After a nine year silence, LEE’s return stars the very popular SONG Hye-gyo in a story about a woman dealing with the loss of her fiance, and her decision to forgive the young man who killed him. Released Oct. 27 by Lotte Entertainment, the somber film sold 50,000 tickets in five days, suggesting that commercial success will elude director LEE this time around.
Meanwhile, five Hollywood films worked their way into this most recent box office chart, with Sony-Buena Vista’s <Real Steel> continuing to lead the pack. The futuristic boxing movie/family drama has earned an impressive 2.2 million admissions since its Oct. 12 release, and managed to land in the no. 2 slot in this latest chart. 20th Century Fox’s <In Time>, a sci-fi drama set in a futuristic world where people only live to 25, also enjoyed a strong debut.
Any copying, republication or redistribution of KOFIC's content is prohibited without prior consent of KOFIC.
Related People Related Films Related Company