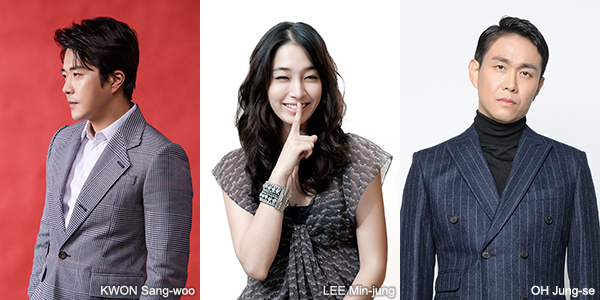 KWON Sang-woo, OH Jung-se, and LEE Min-jung have joined forces for the new film Christmas Present (working title) which went into production on January 17. Also appearing in the film are child actors PARK So-yi and KIM Jun.
From distributor Lotte Entertainment and production company Hive Media Corp, the film is the sophomore directing effort of MA Dae-yun, who previously made the family drama My Little Brother (2017), the only Korean film to date that has been distributed by Disney.
The film follows Park-kang (KWON Sang-woo) a popular actor who is frequently embroiled in scandals. Jo-yoon (OH Jung-se) is his manager and best friend. One day, Park-kang’s ex-girlfriend Soo-hyun (LEE Min-jung) comes back into the picture.
Known as a heartthrob of the early aughts through works like Spirit of Jeet Kune Do - Once Upon a Time in High School (2004), KWON Sang-woo has been prolific of late, appearing in hits such as The Divine Move 2: The Wrathful (2019) and last year’s Lunar New Year hit HITMAN: AGENT JUN. He recently completed filming the period action sequel The Pirates: Goblin’s Flag (translated title).
Character actor OH Jung-se is known for the cult classic rom-com How to Use Guys with Secret Tips (2013) and has recently become a big name on the small screen, appearing in It’s Okay to Not Be Okay and scheduled to appear alongside Gianna JUN in Cliffhanger later this year.
Christmas Present will mark the big-screen comeback of LEE Min-jung, who was last seen in the rom-com Love On-Air (2012), although she has been very active in dramas in the interim.
Meanwhile, PARK So-yi was seen in the Chuseok film Pawn last year and KIM Jun appears in the medical drama Hospital Playlist.
Any copying, republication or redistribution of KOFIC's content is prohibited without prior consent of KOFIC.
Related People Related Films Related Company