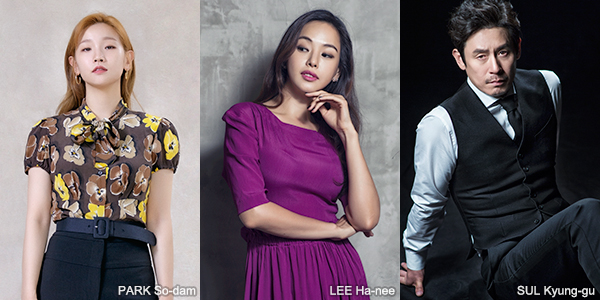 Filming for the upcoming Japanese Occupation Era spy film Phantom (translated title) kicked off on January 4. Believer (2018) filmmaker LEE Hae-young is in the director’s chair and his cast includes stars SUL Kyung-gu, PARK So-dam, LEE Ha-nee, PARK Hae-soo, SEO Hyun-woo and KIM Dong-hee.
LEE’s film takes place in 1933 and focuses on five Korean nationals who are suspected of being anti-Japanese spies known as ‘Phantoms’. The group is held and interrogated in an isolated hotel where they must overcome their suspicions of one another and try to escape.
Among the suspects is Junji Murayama, played by SUL Kyung-gu (Cold Eyes, 2013), a Japanese police officer who has been relegated from the Police Bureau to the communication department. LEE Ha-nee of Extreme Job (2019) plays Park Cha-kyung, a communication officer who specializes in cryptography, and PARASITE (2019) star PARK So-dam is on board as Yuriko, a secretary of a high-ranking Japanese official.
KIM Dong-hee of the Netflix show Extracurricular plays Park Cha-kyung’s younger co-worker Baek-ho and SEO Hyun-woo (The Man Standing Next, 2020) is the introverted cryptographer Chun Kye-jang. Meanwhile PARK Hae-soo (Time to Hunt, 2020) plays Kaito, the Japanese security agent who leads the investigation.
Phantom is being produced by The Lamp, the company behind SAMJIN COMPANY ENGLISH CLASS (2020) and A Taxi Driver (2017), and is being financed and distributed by CJ Entertainment.
Any copying, republication or redistribution of KOFIC's content is prohibited without prior consent of KOFIC.
Related People Related Films Related Company Related News