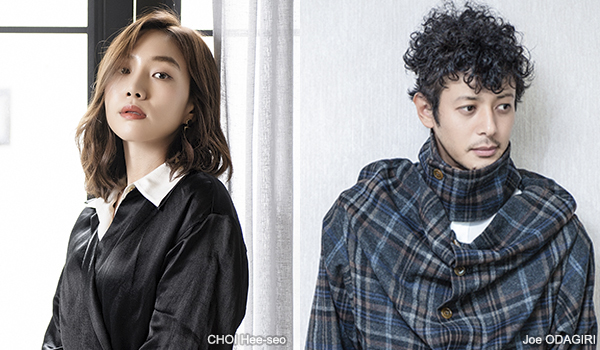 Actress CHOI Hee-seo (aka Moon CHOI) recently teamed up with Japanese stars Joe ODAGIRI and IKEMATSU Sosuke for the film Angel of Asia (translated title). From Japanese filmmaker ISHII Yuya, the film was shot entirely in Korea over February and March of this year.
IKEMATSU stars as Takeshi, a young Japanese man raising his eight-year-old son alone following his wife’s death. They travel to Seoul to meet Takeshi’s estranged older brother (Joe ODAGIRI), who is having a hard time, contrary to Takeshi’s expectations. Once there, he tries to help his older brother’s shady cosmetic sales work. Meanwhile, Choi Seol (CHOI Hee-seo) is a singer relegated to performing at traditional markets, and whose agency won’t let her perform her own songs. Before long, the three characters cross paths.
CHOI has been active on the big screen since 2009’s Lifting Kingkong but finally broke out as the co-lead of LEE Joon-ik’s Anarchist from the colony (2017), which garnered her several Best New Actor prizes in Korea. She was also celebrated for her starring role in HAN Ka-ram’s acclaimed debut Our Body (2019) and will be seen next month in the action-drama DELIEVER US FROM EVIL, alongside HWANG Jung-min and LEE Jung-jae.
ODAGIRI, an established name in Japan, has worked several times in Korea. He collaborated with KIM Ki-duk twice, on Dream (2008) alongside LEE Na-young and Human, Space, Time and Human (2018), as well as with KANG Je-kyu on his World War II epic My Way (2011). IKEMATSU debuted as a youth in the Japan-set Hollywood film The Last Samurai and recently appeared in KOREEDA Hirokazu’s Palme d’Or winner Shoplifters.
Director ISHII is known for his debut film, the dictionary publishing drama The Great Passage, which earned many awards at the time of its release in 2013. Angel of Asia is expected to be released in Korea in the spring of next year, with a Japanese release also planned for 2021.
Any copying, republication or redistribution of KOFIC's content is prohibited without prior consent of KOFIC.
Related People Related Films