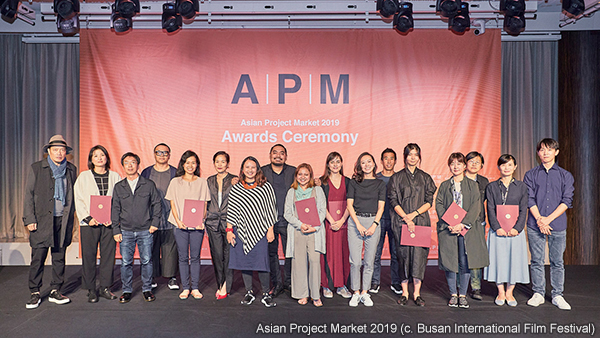 The 22nd edition of the Asian Project Market (APM), held in conjunction with the Asian Film Market during the Busan International Film Festival, which this year celebrates its 24th edition, gave its top prize to the Japanese project Topography of Solitude.
From writer NAKAI Nomie, Topography of Solitude came away from the event with the Busan Award, which comes with a USD 15,000 cash prize and is sponsored by Busan Metropolitan City. The project concerns a woman who works as a stand-in relative for strangers. When her boyfriend dies at the hand of the police, she uses the fake connections she has amassed through her work as she seeks revenge.
Chinese filmmaker HU Jia picked up the MAS Award and a cash prize worth USD 20,000 for his comedy-thriller The Courier Always Knocks Twice, which follows a screenwriter who finds out the main character of his horror films may in fact be himself.
Boldstar, from Filipino director Antoinette JADAONE, earned the CJ Entertainment Award, which comes with a USD 10,000 cash prize. The Lotte Award, which is worth USD 8,410 and is reserved for a Korean project, was picked up by the family drama About Daughter, the latest project from Cart (2014) director BOO Ji-young. Coming with USD 10,000, the KOCCA Award went to the fantasy thriller Winter Worm, Summer Grass from local cineaste KANG Sang-woo.
The Kazakh drama Mother Tongue by Zhannat ALSHANOVA, was awarded ARTE France’s ArteKino International Award, worth EUR 6,000 (USD 6,600). The Third Wife filmmaker Ash MAYFAIR was given the Sorfond Award, which will invite her and her project Skin of Youth to the Norwegian South Film Fund’s pitching forum. KANG Dong-hyun of Korea came away from APM with the MONEFF Award for his mystery-horror The Child, which provides USD 20,000 in post-production services.
Any copying, republication or redistribution of KOFIC's content is prohibited without prior consent of KOFIC.
Related People Related Films Related Company Related News