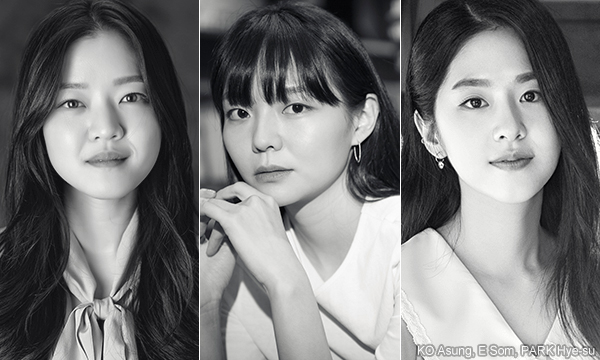 Korean actresses KO Asung, E Som and PARK Hye-su have signed up to appear in Samjin Group’s English TOEIC Class (translated title). The film will be the latest from director LEE Jong-pil.
The narrative concerns employees who take over their company’s English certification course and is set in the 1990s. KO will play LEE Ja-young, a diligent worker in production management who discovers corruption in her company. E Som was cast as JUNG Yoo-na, a fan of detective novels who works in the marketing team. PARK is on board as SHIM Bo-ram, a math whiz from the finance department.
KO Asung is known for her leading roles in the BONG Joon-ho films The Host (2006) and Snowpiercer (2013) and recently scored a hit as the lead in the Japanese Colonial Era protest drama A Resistance. After coming to prominence as a lead in YIM Pil-sung’s Scarlet Innocence (2014), E Som has gone from strength to strength, earning strong notices for Microhabitat (2018), among others. PARK Hye-su appeared in KANG Hyoung-chul’s period tap-dance extravaganza Swing Kids last year.
Director LEE previously made the period pansori musical drama THE SOUND OF A FLOWER (2015) with PARK Shin-hye. Prior to that he made the musical comedy-drama Born to Sing (2013) with KIM In-kwon.
Samjin Group’s English TOEIC Class is scheduled to begin production towards the end of October. The LAMP, which previously made A Taxi Driver (2017), is handling production, while Lotte Entertainment will distribute the completed film.
Any copying, republication or redistribution of KOFIC's content is prohibited without prior consent of KOFIC.
Related People Related Films Related Company