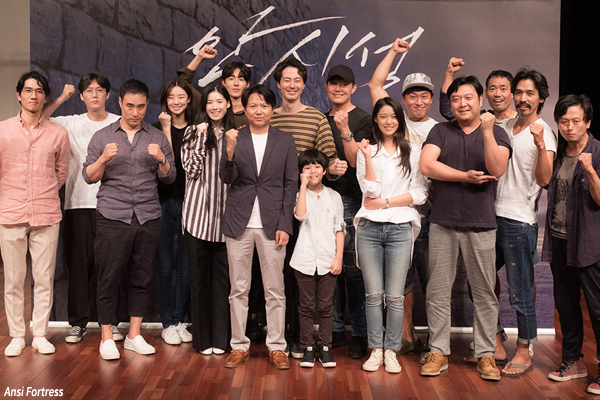 Period blockbuster Ansi Fortress, the first feature film project by Next Entertainment World’s new production arm Studio & NEW, began filming on August 23rd. ZO In-sung stars in the latest from director KIM Kwang-sik and production is expected to carry on for five months.
The film chronicles the 88 days of the Siege of Ansi as Goguryeo and Tang forces faced of in the year 645 during the Three Kingdoms of Korea Era. The battle was part of the largest Chinese offensive maneuver of the period.
Joining ZO, who last featured on the big screen in the Lunar New Year prosecutor drama hit The King, will be PARK Sung-woong (The Tooth and the Nail), SUNG Dong-il (Midnight Runners), JUNG Eun-chae (Nobody’s Daughter Haewon, 2013) and young TV star NAM Joo-hyuk, who will be making his feature film debut in the project.
Director KIM last filled the director’s chair for the media thriller Tabloid Truth (2014). He also helmed the gangster romcom My Dear Desperado in 2010. Ansi Fortress will be released at some point next year by Next Entertainment World. Soojak Film is co-producing the project, which is said to carry a KRW 15 billion (13.33 million) price tag. Prior to Ansi Fortress, Studio & NEW produced the smash hit TV series Descendants of the Sun last year.
Any copying, republication or redistribution of KOFIC's content is prohibited without prior consent of KOFIC.
Related People Related Films Related Company