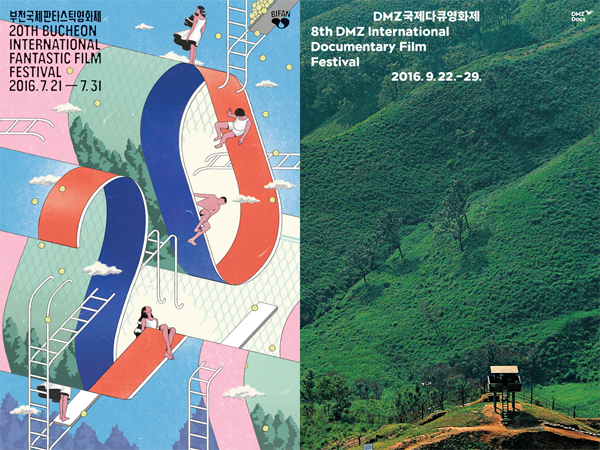 Bucheon International Fantastic Film Festival (BiFan) which is a mecca of fantasy movies and DMZ International Documentary Film Festival (DMZ Docs) which shows the trend of the world’s documentary films have signed the MOU on March 22nd. Through the pack, they decided to operate the cooperated program, ‘Fantastic Documentary’ at Fantastic Cube, BiFan’s exclusive theater.
They planned to screen some of the award-winning films and controversial films from DMZ Docs at BiFan’s exclusive theater. In addition, they will participate to invigorate film industry of Gyeonggi-do Province and Bucheon-si and to corporate business such as youth film education and film promotion.
The signing ceremony of MOU at Fantastic Cube was attended by related people including CHOI Yong-bae, BiFan’s director, CHO Jae-hyun, DMZ Docs’s director and YEOM Jong-hyun, chairman of the Culture and Tourism Committee of Gyeonggi-do Provincial Council. As Bucheon of BiFan and Paju of DMZ Docs belong to Gyeonggi-do Province, the fests are supported by the Culture and Tourism Committee of Gyeonggi-do Provincial Council. Chairman YEOM expressed his expectation of synergy effect through collaboration by saying “Thank you for signing MOU between two festivals.”
Meanwhile, Fantastic Documentary’s first film is Twilight of a Life by director Sylvain Biegeleisen, which is about 95-year-old mother with late-stage lung cancer and her son. The documentary was screened at the 8th DMZ Docs in 2016.
Any copying, republication or redistribution of KOFIC's content is prohibited without prior consent of KOFIC.
Related People Related Company Related News

[News] The Winners of the Top Award at the 26th BIFAN, You Won’t Be Alone, and Body Parts

[Features] The 26th BIFAN Declared 'Beyond Pandemic' Film Festival Instead of 'Post Pande...