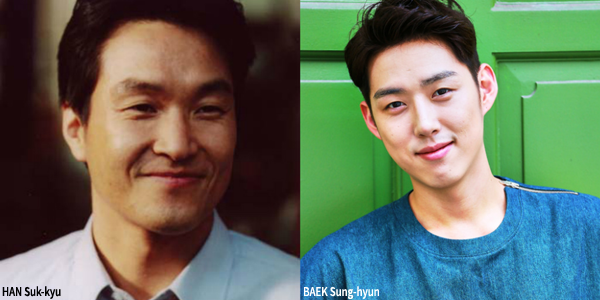 HAN Suk-kyu and BAEK Sung-hyun will play father and son in the upcoming Korean thriller Father’s War. The film is the commercial debut of indie filmmaker LIM Sung-chan, who previously made A Light Sleep (2008).
The film takes its cue from a real life event in 1998, when a young military officer died in the Joint Security Area between North and South Korea. The young man’s father, also in the military, tries to piece together the mystery surrounding his death.
HAN makes his return to the big screen after a sting on TV in the recent hit TV show Romantic Doctor, Teacher Kim. Prior to that, HAN shot the Showbox thriller The Prison with KIM Rae-won which is due out in Korea next month. HAN is one of Korea’s biggest stars, rising to prominence in the late 1990s, headlining classics such as LEE Chang-dong’s Green Fish (1997) and KANG Je-kyu’s Swiri (1999).
After making a mark as a teenager in films such as Marathon (2005), BAEK Sung-hyun has become a popular TV star, last seen in Voice. BAEK’s most recent film roles include collaborations with director LEE Sang-woo, including Speed (2015), Bittersweet Brew (2016) and Walking Street.
Production, which will kick off at the end of February, is expected to carry on for three months.
Any copying, republication or redistribution of KOFIC's content is prohibited without prior consent of KOFIC.
Related People Related Films Related Company