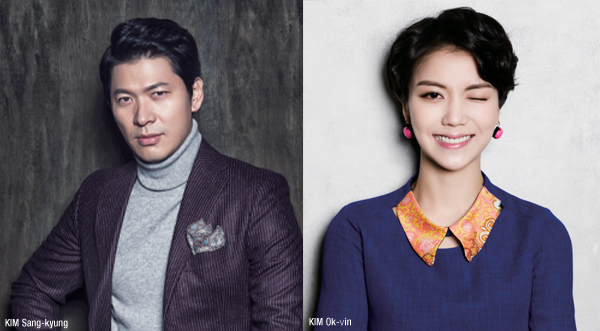 Stars KIM Ok-vin and KIM Sang-kyung will team up for Top Secret Information, a new military thriller which will mark the comeback for director HONG Ki-seon, whose last title was released in 2009.

KIM Sang-kyung will play a former colonel in the airforce who is demoted down to the rank of a soldier following an incident. His soldier becomes embroiled in a new case and along with the help of an investigative reporter played by KIM Ok-vin, they seek to unravel the mystery.

KIM Sang-kyung is a veteran star known for his leading roles in BONG Joon-ho’s Memories Of Murder (2003), HONG Sang-soo’s Turning Gate (2002) and several other dark thrillers, including last year’s The Deal.

KIM Ok-vin has been around since The Voice (2005), the fourth installment in the Whispering Corridors series but really made her mark with a leading role alongside SONG Kang-ho in PARK Chan-wook’s Cannes-invited vampire drama Thirst (2009).

Director HONG, who debuted with Cutting Sadness With The Knife Which Sprouts From The Heart in 1992, made The Road Taken in 2003 and took part in 2006’s If You Were Me 3, was last seen with the murder drama Where the Truth Lies (2009), which was also known as The Case of Itaewon Homicide.

Top Secret Information which starts filming in September will be released at some point next year.