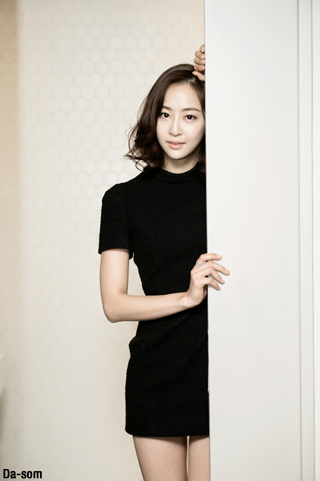 Da-som, a member of the K-pop supergroup Sistar, has been cast in the leading role of a new Korean-Chinese co-produced romantic comedy. The Strange Cohabitation (translated title). The film will be directed by Korean filmmaker KIM Hyeong-jun, who previously made No Mercy (2010) and The Scent (2012).

The pop star will play, appropriately, aspiring actress HAN Geun-hye who lives with two male friends who pretend to be homosexuals. The male pair will be portrayed by Chinese actor YU Shao-qun (1911, 2011) and Korean performer KIM Jung-hoon (Stray Dogs, 2014).

The film, which is a joint venture between South Korea outfit Golden Monkey Media Group and a Chinese film production company Zhejiang Tianpeng Media, is expected to hit Chinese screens at some point in the second half of this year.

Though this will mark her first leading role, Da-som is no stranger to acting, having made her debut in the TV sitcom Shut Up Family in 2012 and having also appeared in SHIN Yeon-shick’s omnibus indie drama Like a French Film, which was released theatrically earlier this year.

The Strange Cohabitation follows on the heels of a raft of Korea-China co-productions currently being prepped for release this year, such as Director CHANG’s Fatal Countdown: Reset and a Chinese version of the smash hit Korean drama Heirs.