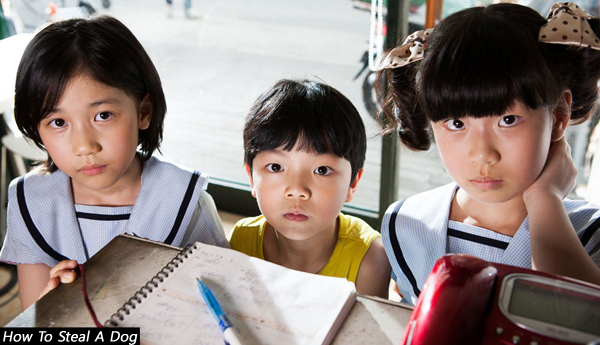 KIM Sung-ho’s family film How to Steal A Dog has added yet more prizes to its awards bounty after making away with three nods at the 33rd Ale Kino! International Young Audience Film Festival in Poznań, Poland. Just two weeks ago, the picture took the Best Feature Film Prize at the International Children’s Film Festival India.
Based on the novel of the same name by Barbara O’Connell, How to Steal A Dog won the Golden Goats Feature Film for Children Prize, as well as the Marcinek – Feature Film Prize and the Teacher’s Award. In the film, a girl who lives with her single mother tries to help when the family falls on hard times, by stealing a wealthy restaurateur’s dog and claiming the reward money worth USD 5,000.
In her first film role since leading BONG Joon-ho’s Mother (2009) is KIM Hye-ja, playing the dog owner, while the mother is played by Old Boy (2003) star GANG Hye-jung. Director KIM is well known for making the 2003 K-horror Into the Mirror with YOO Ji-tae and more recently has been involved in omnibus features such as Modern Family (2012) and Horror Stories II (2013).
How to Steal A Dog debuted in Korean theaters last year, though after a slow start, the title was briefly rereleased earlier this year. The film logged just over 300,000 admissions (USD 2 million) during its two release windows.
The Ale Kino! fest took place between November 29th and December 6th.
Any copying, republication or redistribution of KOFIC's content is prohibited without prior consent of KOFIC.
Related People Related Films