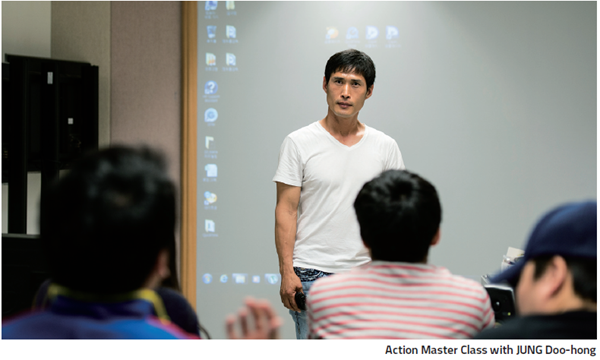 The Korean Academy of Film Arts (KAFA) organizes special workshops to boost the creative imagination of young filmmakers and build their knowledge through talks with masters from direction, acting, cinematography, special effects, and choreography. This project from KAFA+ which started in 2013 has invited filmmakers such as director PARK Chan-wook and JUNG Ji-woo, producer TCHA Sung-jai, action director JUNG Doo-hong and actor CHOI Min-shik in the past.
This year, the KAFA hosted a series of master classes and workshops with renowned Korean film industry professionals. The masters include Seoul Action School’s action director JUNG Doo-hong, costume designer KWON Yoo-jin, cinematographer LEE Doo-man and Story & Story CEO IM Sang-jin.
The three-day workshop ‘Action Master Class with JUNG Doo-hong’ took place in Seoul between 30 March-1 April. As action director of The City Of Violence (2006), No Blood No Tears (2002), and The Berlin File (2013), JUNG has been a major player in the history of Korean action films. Participants were selected through application review and interview sessions.
During the master class, three teams of two, composed of one director and one cinematographer, were made and received thorough instruction from JUNG. JUNG did not only teach the theory behind action directing, but also helped participants produce a short action film during the workshop.
Costume designer KWON Yoo-jin then took over the class from JUNG. Started his career with IM Kwon-taek’s Kilsodeum, he has worked on a handful of films including The Good, The Bad, And The Weird (2008), Masquerade (2012), The Pirates (2014) and Ode to My Father (2014). At the one-day class, he talked about how to represent films’ setting realistically and creatively as well as how to do ‘concepting.’ With references such as The Good, The Bad, And The Weird and Masquerade, KWON taught costume production and how to use creativity in putting together something between historically real and filmic fictional.
Cinematographer LEE Doo-man was the next one. His three-day intensive cinematography workshop, where he introduced the art of cinematography, supervised the hands-on workshop, and taught D.I., was held over 3 days in early September. Before the team actually went on shooting, LEE and the participants shared ideas extensively and selected shooting equipment together for the students’ better understanding in cinematography.
The latest session, ‘Planning Heart-winning Films,’ was taught by IM Sang-jin, an expert in planning and developing film projects, at the end of September. It was particularly meaningful as it was the first masterclass focused on project planning, an early part of pre-production. In addition to precedented masterclasses on production and/or post-production, IM’s class on project development played an important role in designing the KAFA’s full-scale production workshop, spanning all three phases of filmmaking.
Any copying, republication or redistribution of KOFIC's content is prohibited without prior consent of KOFIC.
Related People Related Films Related Company