Triumph of Young and New Films 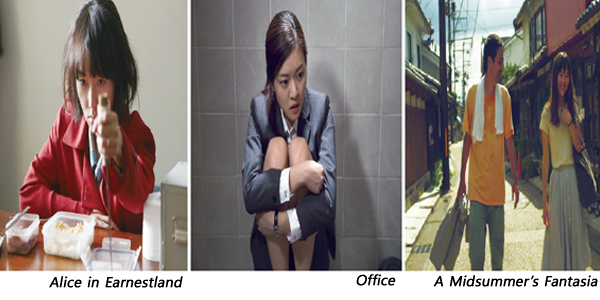 2015 was a fruitful year for Korean cinema for fledging talents. Up-and-coming feature directors - many of them are from the independent filmmaking scene - saw great leaps in their careers. Considering the market circumstance for indie films, their achievements mostly shone at international film festivals.
JANG Kun-jae is not a new name compared to other up-and-coming filmmakers. Since the debut feature, Eighteen (2010), he has been considered a promising indie director. The young director seemed to have finally hit a career breakthrough this year with his third feature A Midsummer’s Fantasia. The Korea-Japan co-production, which was commissioned by the Nara International Film Festival, was produced by Japanese auteur KAWASE Naomi. In addition to becoming one of the highest grossing independent films of the year, the light romance drama has traveled to the Busan International Film Festival, International Film Festival Rotterdam, Hong Kong International Film Festival, Vancouver International Film Festival and many more.
With a strong touch for the thriller genre, The Chaser and The Yellow Sea screenwriter HONG Won-chan stepped behind the camera for the first time this year. Receiving its world premiere in Cannes, Office had a fine year both at home and internationally. Following its debut in Cannes as a Midnight Screening selection and its North America premiere at the Fantasia Film Festival in Canada, Office finally returned home recently for theatrical release. The workplace murder mystery chiller that stars KO Asung, PARK Sung-woong and BAE Sung-woo grossed $2.92 million from 440,000 admissions.
Another indie sensation of the year was Alice In Earnestland, a modern twist of classic novel “Alice in Wonderland” by AHN Gooc-jin. With a budget that is strikingly low, compared to average production budget for Korean commercial films, the Korean Academy of Film Arts production won the Grand Prize at the Jeonju International Film Festival’s Korean film competition, followed by screenings at the Shanghai International Film Festival and the Vancouver International Film Festival. Alice in Earnestland is AHN’s first feature-length film.
Though his short films Green Slime (2012) and Suffocation (2012) were invited to various international film festivals, KWON Oh-kwang came to fame with his writing work on MOON Byoung-gon’s SAFE (2013), which won the Palme d’Or at the short film competition in Cannes. KWON is now ready to step into the spotlight as director as his feature directorial debut Collective Invention was selected to receive world premiere at the Toronto International Film Festival and then international premiere at the Busan International Film Festival. The offbeat drama is about a young man who participates in a pharmaceutical company’s clinical test trials and mutates into a piscine humanoid.
Any copying, republication or redistribution of KOFIC's content is prohibited without prior consent of KOFIC.
Related People Related Films Related Company Related News