Apr 13, 2015
Kicks off on Korea Day with THE SATELLITE GIRL AND MILK COW 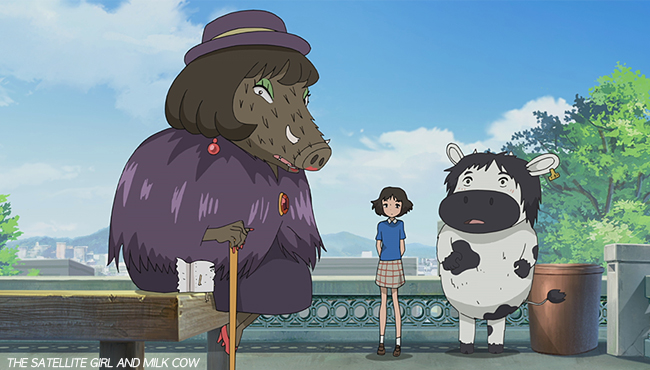 Kicking off on the 3rd in honor of Korea Day at the Freer and Sackler Galleries of the Smithsonian’s Museums of Asian Art in Washington, DC, the Korean Film Festival DC, curated by To Vick, will roll out its 10th edition with a screening of JANG Hyung-yun’s animation The Satellite Girl and Milk Cow. Among the films will be a trio of works by prolific writer/director JANG Jin, who will be attending the event in person.
JANG will be in town to present his two most recent films, the transgender cop thriller Man on High Heels and the trans-faith comedy We Are Brothers, both from 2014. He will also be on hand to present his 2010 comedy The Quiz Show Scandal.
The festival will also shine a spotlight on indie fare, such as titles which screened at the Busan International Film Festival, such as JANG Kun-jae’s A Midsummer’s Fantasia, End of Winter and The Liar, the social drama Cart from BOO Ji-young and HONG Sangsoo’s latest film Hill of Freedom.
Filling out the lineup will also be a retrospective screening of PARK Chul-soo’s 301, 302 (1995) and SHIM Sung-bo’s maritime thriller Haemoo, producer and co-written by BONG Joon-ho. The festival will close with the special show "Electric Imaginary: Compositions Inspired by Nam June Paik”, inspired by artist PAIK’s crossmedia works, on June 21st.
Any copying, republication or redistribution of KOFIC's content is prohibited without prior consent of KOFIC.
Related People Related Films Related Company