Apr 08, 2015
North American Premiere for THE KING OF JOGKU in New York 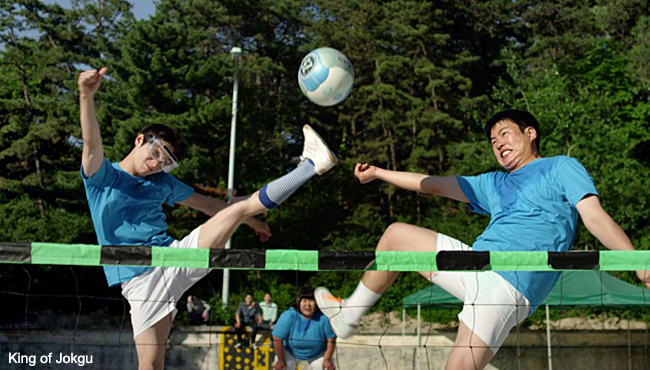 Starting next week, New York will play host to a series of films showcasing the talents of new Korean directors. Staged by the Korean Cultural Service NY and Asia Society, the ‘Emerging Talent’ series will run from April 14th to May 27th.
Among the five films will be the North American premiere of WOO Moon-gi’s The King of Jokgu. An independent sports comedy about Jokgu, a Korean cross between football and volleyball, the film was a surprise indie hit and recently picked up five nominations at the Wildflower Film Awards Korea.
Festival favorites have also been selected for the series, including PARK Jung-bum’s Alive, a feature-length Jeonju Cinema Project, LEE Yong-seung’s 10 Minutes, a Dankook Unversity graduate feature which debuted at the Busan International Film Festival, and LEE Don-ku’s Fatal, another Busan debut.
Beyond new directors, the series will also shine a spotlight on new actor LEE Min-ho, already a massive presence on television, who took on his first leading film role in this year’s gangster thriller Gangnam Blues from YOO Ha.
The weekly screenings will take place at the Asia Society in Manhattan and will be free of charge.
Any copying, republication or redistribution of KOFIC's content is prohibited without prior consent of KOFIC.
Related People Related Films