Press Conference for BROKEN, Based on HIGASHINO Keigo Novel 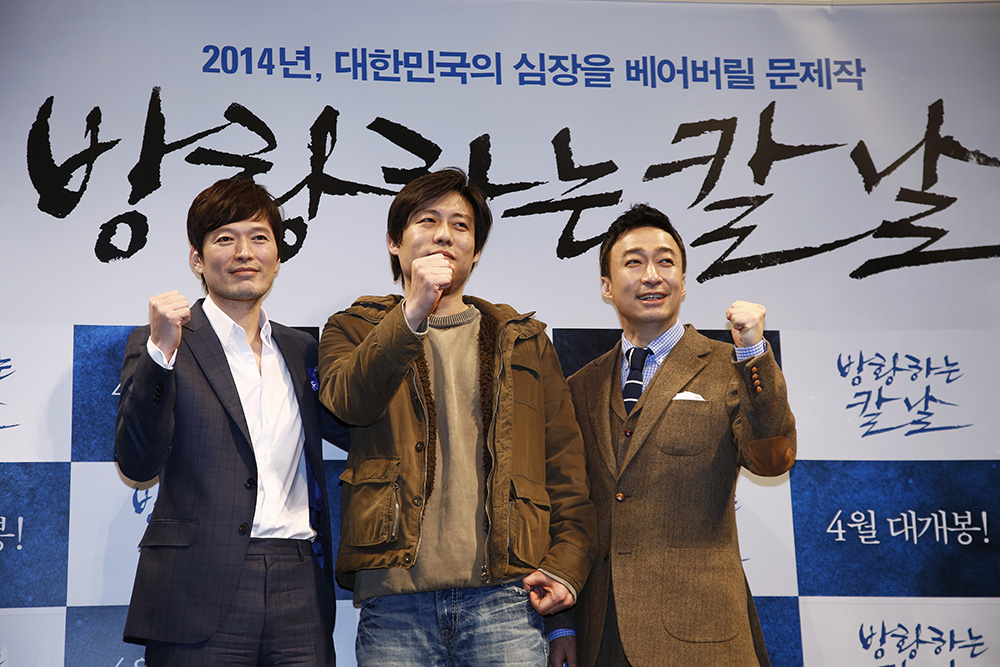 A press conference for the thriller Broken was held at the Apgujeong CGV Theater and was attended by cast members including JUNG Jae-young and LEE Sung-min, as well as filmmaker LEE Jeong-ho.
Broken is based on an original story (The Hovering Blade) written by the Japanese author HIGASHINO Keigo, who is well known in Korea for his films based on his works such as Perfect Number (The Devotion of Suspect X) and 2009’s White Night (Byakuyako). The film tells the story of a widower who becomes a fugitive after hunting down the boys who are responsible for the rape and murder of his daughter, the only family member left after his wife passed away.
“Although the novel touched me, I refused the offer to direct the film adaptation at first. I was worried that without the proper preparations to deal with a sensitive tale such as this, I could overlook a significant aspect of the story,” said the filmmaker. He went on to relate “Many thoughts went through my mind after reading the book five more times. The reality that kept on repeating itself seemed so bleak despite the fact that ten years had passed, but in the end the novel’s last scene gave me a sense of release. And that was what inspired me to work on the screenplay with the hopes of becoming the voice of those in desperate need of having their messages spoken.” He added that: “I did my best to preserve the emotional depth of the original story yet made an effort to take a step away and observe things rationally as I did not want to merely display blind rage.”
JUNG Jae-young, who plays the tragic father, explained: “It broke my heart reading the screenplay. But I liked that the film does not take sides and objectively gazes at the situation.” He went on to sat that “This role was difficult because I was forced to imagine things I would never think of normally such as what I would feel like in the face of my child’s death, how I would get my revenge, and what it would feel like when I took my revenge.” LEE Sung-min takes on his first lead role as a detective on the trail of a father-turned suspect. “I like this film because it lacks a superhero. There is a level of reality which presents people you can easily find in everyday life instead of traditional cinematic characters.”
Financed and distributed by CJ Entertainment, Broken is scheduled to be released theatrically on April 10th.
Any copying, republication or redistribution of KOFIC's content is prohibited without prior consent of KOFIC.
Related People Related Films Related Company