The World Pays Attention on the 14th JIFF

Short! Short! Short! is a short film project of JIFF that started in 2007. In this program, two or three appointed directors make films under a common theme or material. This year, the stories of one of Korea’s representative novelists, KIM Young-ha, were cinematized under the theme of ‘When a novel meets a film’. The films for Short! Short! Short! were revealed at the Industry Screening on April 26th. KIM Young-jin, the chief programmer, emceed the press conference with directors RHEE Jin-woo, LEE Sang-woo, PARK Jin-sung and PARK Jin-seok in attendance.
RHEE Jin-woo, who was awarded at the Busan International Film Festival in 2006 and Mise-en-Scene Short Film Festival in 2008, introduced Waltzing on Thunder. The PARK brothers, Jin-sung and Jin-seok, have been active as filmmakers, musicians and photographers. The film they presented was The Body. LEE Sang-woo, the director of controversial films such as Mother Is a Whore and Barbie, brought Exit.

RHEE’s Waltzing on Thunder described the anxiety of contemporary people through the structure of romance. It features a weird ceremony of people awakening to new experiences after being hit by lightning. KIM Seo-hyung, who appeared in Doomsday Book and The Berlin File, played the lead role of this film. The PARK brothers added their own fantasy and imagination to the original story to dramatically emphasize the spooky feel of The Body. LEE’s Exit is the journal of a young man in his 20s who lives a life without an exit wandering from a motel to another one.
“I found the original story so charming that I didn’t even need a second to think whether to adopt it or not.”, said RHEE, the director of Waltzing on Thunder, “On the other hand, I had a lot of difficulties because the amount was quite substantial and there were content and details hard to handle in a short film” He then added, “The novel is solemn and dark, but I tried to make it as bright and cheerful as possible.”
The director of Exit, LEE said, “I’m not a regular reader, so I didn’t know who KIM Young-ha was. After receiving a suggestion to direct the film, I searched the Internet for the original novel. The material related to the sexual organ of a woman was very impressive.” He then said, “I wanted to leave the story as in the novel, but figured that if so, audiences wouldn’t really accept it. So I put stress on the tones of actors. I had a really good time making the film.” He also recalled the difficulty to cast the lead actress because of the high level of nudity, bed scenes and the scene where she had to shave her pubic hair. 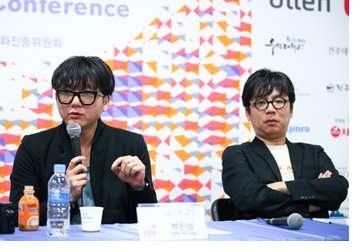 PARK Jin-sung, one of the directors of The Body explained the film by saying, “I used the structure of a suspense film because it’s my favorite genre. I revised the description a bit, but it didn’t much affect the original.” He then added, “A novel and a film are the same in a way because they both can move human hearts. After reading the story, I thought a mono tone film would be appropriate, and the director of photography agreed with me.”
KIM Young-ha, the author of the novels said, “I was surprised because each of the directors made films with a different approach and in a different tone but they are harmonized like one film.” He also expressed gratitude saying, “It is a pleasure to a novelist to see his stories reinterpreted in a different form. I consider this as a big present from JIFF.”
▶ Jeonju Digital Project: Strangers 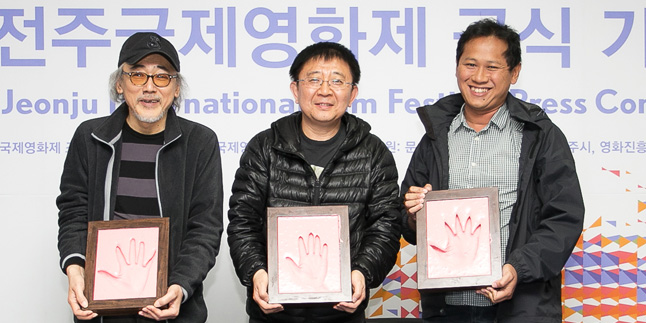 JIFF chooses 3 global directors and has them make 30-minute-long digital films for Jeonju Digital Project (JDP), a program introduced under the goal to screen and distribute the films in domestic and foreign markets. For each film, KRW 50 million (USD 45 thousand) is given. This year, the program focused on Asia, where strangers dwell. The films were released at the Industry Screening on April 27th. LEE Sang-yong, a programmer of JIFF, presided the press conference, where KOBAYASHI Masahiro, ZHANG Lu and Edwin attended.
KOBAYASHI, a jury member at last year’s edition of JIFF, came back to Jeonju with Strangers When We Meet. The Korean-Chinese director ZHANG Lu, who introduced his feature debut film Tang Poetry at JIFF 10 years ago, made Over There. Edwin made his third visit to JIFF after screening short films in 2008 and 2011 to present Someone’s Wife in the Boat of Someone’s Husband.
KOBAYASHI’s Stranger When We Meet portrays the strangers’ emotions between a husband and a wife who never communicate with each other. This nearly nonverbal film stimulates the imagination of audiences using visual and sound effects. Over There directed by ZHANG shows the life of foreign labor workers living at the corner of the Seoul metropolis. This film gained attention for the fact that it is his first documentary. Edwin directed Someone’s Wife in the Boat of Someone’s Husband, in which a man chases a legend all the way down to an island, where he encounters someone named the same as the legendary figure. The scenery of the island is outstanding.

KOBAYASHI, the director of Stranger When We Meet said, “The festival asked me to make a digital film about strangers last December, but I had think carefully because I didn’t have much time. But I remembered that I had written a scenario after finishing the previous film, so I started making a film with it. Later, I realized that it just fitted the theme.” This film is a sequel of The Rebirth, which he made in 2007.
ZHANG, the director of Over There said, “After receiving the suggestion from JIFF to make a film about strangers, I thought to myself that I actually look like a stranger. I asked them if I could make a documentary and they let me.”  He then added, “When I came to Korea, most of the foreigners I saw were tourists. However, at certain places, there were more foreign labor workers than tourists. So I wanted to make a film about that scene.” This is a film that serenely portrays the life and sorrows of foreign labor workers in Seoul, far apart from their home countries.
Edwin, the director of Someone’s Wife in the Boat of Someone’s Husband, expressed his thoughts about digital filmmaking by saying, “In Indonesia as well, the number of directors using digital methods is increasing. We are in the middle of the shift from the analog to the digital age. I think this is an interesting moment and this is probably because of the ability to tell stories in a new way.” He also said, “When 35mm projector first came out, people thought beam projection was magic, but it has lost all its charm after digital filmmaking was introduced and I miss the old days.”
Any copying, republication or redistribution of KOFIC's content is prohibited without prior consent of KOFIC.
Related People Related Films Related Company