Beyond Korea, to English speaking nations

Feb 04, 2013
RUNNING MAN, First Korean Film to Receive Main Investment from 20th Century Fox
Running Man, directed by CHO Dong-oh and starring SHIN Ha-kyun, is the first Korean film featuring 20th Century Fox International Production (FIP) as the main investor. The question is what made one of Hollywood's major studios decide to invest in the project. 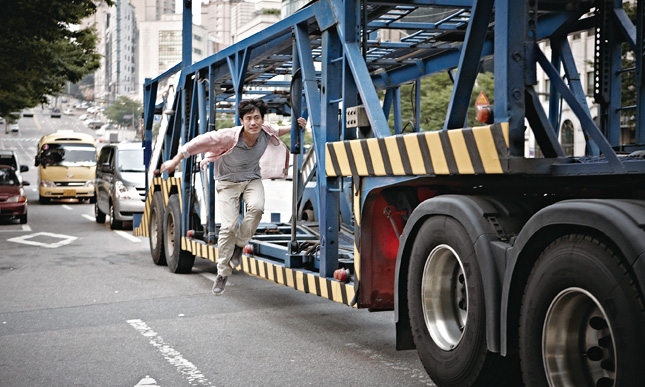 Director
CHO Dong-oh Starring SHIN Ha-kyun, KIM Sang-ho, LEE Min-ho, CHO Eun-ji Release Date Early 2013
Jong-woo, the protagonist of the film, begins to be chased and watched by the entire nation after he accidently gets involved in a homicide case. SHIN Ha-kyun takes one the first action role of his career as Jong-woo. Gi-hyuk, Jong-woo’s son, who is 17 years younger than him, is played by drama star LEE Min-ho. The rest of the cast includes: KIM Sang-ho acts as a detective who goes after Jong-woo; CHO Eun-ji as a weekend paper reporter digging out the truth; and OH Jeong-se as a computer geek.
Director CHO explains the film by saying, “The concept of this film is running, rolling, tumbling and falling.” This simply means that it shows an exciting race at the center of a city. SHIN can list all the places where the film was shot: “We ran like crazy all the way around Chongno, a warehouse in Incheon, World Cup Stadium et cetera. I even had to jump down from a bridge on the Han river.” Then why did he choose to be in the film when he knew what he would have to go through? He answered the question by saying, “I wanted to be in at least one action film before I get older.” He covered over 90% of the action scenes without the help of a double. The director said, “As for the action in the film, I didn’t intend to make it look cool, but I depended rather on the spontaneity and wit of the actors.” This was achieved through a maximized usage of location filming.
It might sound strange that an ordinary man who has never been trained in any kind of special forces runs away after being falsely accused of a murder and suddenly becomes an action hero. SHIN quenched this curiosity by saying, “Jong-woo is actually an ex-convict. He has had many past experiences running from the law.” Then it seems that his getaway won’t be dull at all. The shooting of Running Man finished in November 2012 and it is ready to be released early this year in Korea. It is the first Korean film that featured 20th Century FIP as its main investor.
Why FIP chose Running Man 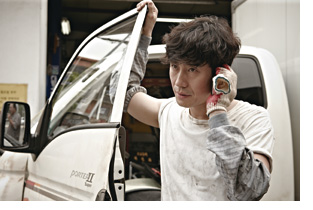 What was the reason that they chose Running Man as their first film for main investment? HEO Seong-il, the producer at FIP Korea in charge of project development, gave an explanation stating, “The film is very fascinating because all the characters, including the escaping man, his son chasing him to find out the truth, a cop running after them and a reporter digging for a scoop, have strong personalities. It’s not just an action film, as it carries distinctly Korean and diverse stories. Moreover, the real action runaway film is a new genre. So we decided to invest in it and collaborate with them.”
According to HEO, FIP deemed that Running Man has factors that both Korean and foreign audiences will go for. The mise-en-scene depicting Seoul, the drama between father and son, action and comedy are among the points of the film that audiences across the world will like. It will be released in Korea before it goes to other countries all over Asia. They are also considering showing it in English speaking countries.
INTERVIEW - Sanford Panitch, President of 20th Century Fox International Production
Ready for active investment in Korean films
20th Century Fox is set to take a big share of the Korean film market. They made a direct investment worth billions of won in the film and are planning to introduce it to the world via their own distribution routes. 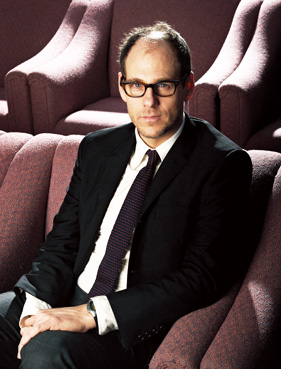 - Can you recall FIP’s accomplishments since its foundation in 2008?
We are very pleased to have entered the Indian market. Bollywood is basically dominated by domestic films, which take up to 90% of the entire market, and it is very hard for foreigners to enter there. We drew good reactions from the Indian market with My Name Is Khan (2012) and it became the biggest hit Indian film  in North America ever following distribution through Fox Searchlight. Miss Bala (2011) a collaboration with Mexico was last year’s Mexican entry to the Best Foreign Language Film award at the Academy Awards. It is one of the achievements that FIP takes pride in.
- As far as I know, you are involved in production and investment, not just distribution of Korean films. Are you also directly concerned in packaging of staff and actors?

Ours is not an in-house system. OH Seong-ho, the president of 20th Century Fox Korea, and HEO Seong-il, the producer at FIP Korea in charge of planning and development, are the key people who find various projects from the Korean market and the headquarter merely supports them. In fact, they have unofficially planned and found a number of projects over the last two years.
- 20th Century invested in The Yellow Sea (2010) as well. How did it happen?
It’s very simple. We believed that NA Hong-jin is a very successful commercial film director. Considering the budget, he made a film on a grand scale with  impressive sequences. The style of the film perfectly matched the direction that 20th Century Fox aims at. We don’t always pursue blockbusters.
- What possibilities do you look for in the Korean market before you decide what film you will invest in, produce and distribute?

Due to the language barrier, people at our headquarters cannot exactly understand what films are really ‘Korean.’ So the roles of key personnel who actually look into Korean projects is very important. By the way, I think the fact that domestic films take more than 50% of the market share definitely means the market is quite stable. However, we are also very aware that the market conditions are different in each country. In Japan for instance, they respect their own consortium system. We will study the Korean market in detail. I watched every film ranked in the top 10 in the last four or five years. I am also interested in many Korean actors and actresses.
- Did you meet any Korean directors or actors in person?

I met up with IM Sang-soo, the director of The Housemaid (2010). We are working on something, but it’s too early to give you details about it yet.
- What is your management plan after the project?
There are several other films which we are planning and developing besides Running Man, but we don’t think we need to be in a hurry at all. Our goal is to present the best project at the best time. We will continue to invest in good films and introduce them to the world through the strong distribution network of 20th Century Fox.
Photographed by HWANG Sang-jun
Any copying, republication or redistribution of KOFIC's content is prohibited without prior consent of KOFIC.
Related People