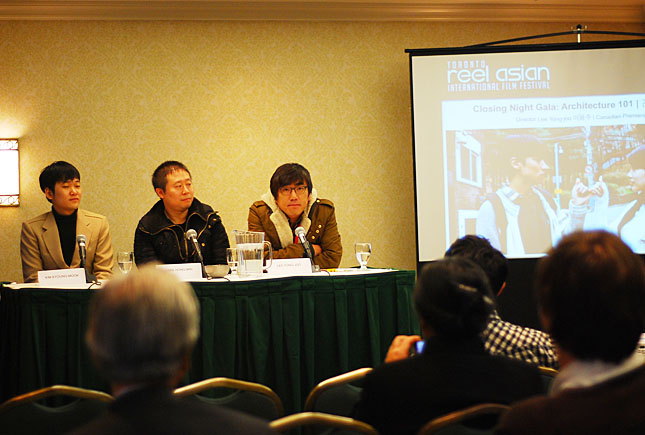 On November 7th, the 16th Toronto Reel Asian International Film Festival (TRAIFF) held a press conference at the Marriott hotel to showcase three Korean feature films in their program. Co-hosted by the Korean Consulate, TRAIFF introduced director LEE Yong-joo with Architecture 101, PARK Hong-min with A Fish, and KIM Kyung-mook with Stateless Things. As Korean films are hard to come across in Toronto, the directors received many words of appreciation and thanks from the crowd for allowing this community to screen their films.
KIM’s Stateless Things raises highly sensitive topics in the eyes of a general Korean audience. This indie film involves a North Korean defector who illegally immigrates to South Korea, and a gay prostitute who is in a complicated relationship with a married man. They both suffer while trying to survive and somehow find one another.
The film draws Seoul as a city that is broken, reflected via these characters. Although censorship limited parts of this film when it screened in South Korea, Stateless Things was recognized and embraced internationally starting with its world premiere at Venice. It was also selected for film festivals in London, Rotterdam and Hong Kong. The international recognition and praises KIM received are in turn what helped afford him his local release in South Korea and brought him more attention.
A Fish is the first 3D film to screen at TRAIFF. The film is about a man in search for his wife who becomes a shaman and his dire attempts to bring her back home. The 3D aspect heightens the supernatural subject matter the film deals with.
The closing gala at this year’s TRAIFF is the Canadian premiere of LEE Yong-joo’s Architecture 101. Already proven to be a hit in Korea, this film takes the audiences on a nostalgic trip to two characters\s' pasts and their first love. Comparing the process of building a house to building a relationship, the importance of foundation and communication is just one of the many parts in the story to pay attention to. Architecture 101 will bring a heartwarming closure to the 6 day festival.
In addition to the three feature films, TRAIFF will screen five Korean shorts including KIM Jae-wook’s Conscience, KIM Yong-sam’s Home Entertainment, KWON Ha-yeon’s Lack of Evidence, Mina T. SON’s Making Noise in Silence, ZONG Eui-Yong’s My Grandpa, and Wesley CHO’s TranSiam.
The Toronto Reel Asian International Film Festival is a non-profit organization founded in 1997 aiming to provide a showcase of contemporary Asian cinema. They have established themselves as Canada’s largest Asian film festival by providing a platform and bridge to Asian cinema and filmmaking through screenings, forums and workshops.
With an average of 2 Korean feature films a year, 2012 was a first to bring 3 directors to the city. These three films vary in themes, style and genre which will provide a good representation of Korean films in general. Toronto will be able to get a whiff of what Korean films are about, and hopefully arouse more interest for subsequent Korean films.
The presence of Korean cinema is becoming more prominent in Toronto as Korean productions have been increasing in quality. In previous festivals, TRAIFF presented YANG Ik-june’s Breathless, and earlier films by YEUN Sang-ho and PARK Jung-bum to name a few. It is clear that TRAIFF is looking forward to continually bring Korean films to Toronto. TRAIFF is held from November 6th to the 11th this year. For more info, visit www.reelasian.com.
Any copying, republication or redistribution of KOFIC's content is prohibited without prior consent of KOFIC.
Related People Related Films