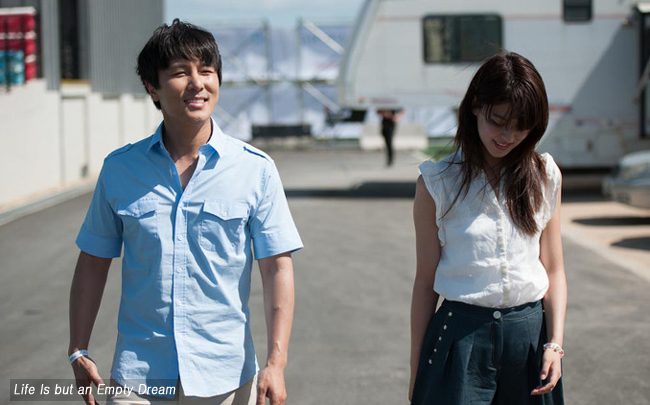 The 11th Jecheon International Music & Film Festival (JIMFF) will be held in Jecheon nicknamed a ‘city of cool breezes and beautiful lakes’ under the motto of the popularization and specialization of music films. KoBiz Online Screening service has offered opportunities to watch the present and future of Korean films regardless of time and space. This time, the service will present Korean films selected for this year’s JIMFF that will entertain viewers with a wide array of music and extraordinary film styles.
Life Is but an Empty Dream directed by CHO Sung-kyu paints three youngsters who chase their dreams in a rock festival. KIM Dong-wan, a veteran singer and an actor with natural acting took the lead role of the film.
Other noteworthy films are The Summer in Ibaraki, a JEON Sung-ho documentary which shows the freshness of Korean-Japanese teenagers who unite through music, Popstars directed by Manu Bogad which brings to light the dark side of a Korean idol singer through the eyes of a foreigner and Rock, Spirit by Lee Hi-chan which has unique humor in an exciting duel between a rock guitarist and a young female shaman. Visitors to KoBiz Online Screening website will be able to fully enjoy the attraction of Korean films.
"Festival Screening: JIMFF 2015" will run for three months from August 20 via KoBiz Online Screening website (screening.koreanfilm.or.kr).
Any copying, republication or redistribution of KOFIC's content is prohibited without prior consent of KOFIC.
Related People Related Films Related Company