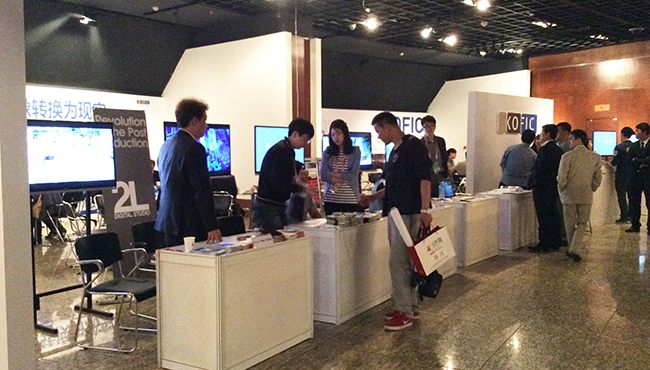 For the largest film festival in China, the Beijing International Film Festival, the Korean Film Council (KOFIC, Chairman KIM Sae-hoon) is getting ready to represent Korea. On top of the usual Korean booth the organization runs, there will be opportunities for on-site business matching, information about location incentive to shoot in Korea, and a VFX showcase of Korean companies.
The Korean Film Center, set up on the 2nd floor of the China Millennium Monument’s A section, will serve as a base for KOFIC and Korean companies during the film festival. The booth will open on Friday the 17th until Monday the 20th, from 9am to 5:30pm. The Korean Film Center is where all Korean film-related materials can be found. Promotional packages and information about the location incentive program will be available. Participating companies include government-run organizations such as the Goyang Industry Promotion Agency and the Seoul Film Commission, while eleven technical services companies and six production and sales companies are also attending. For technical services, the attendees are Digital Idea, Moneff, Z-Storm, Cocoavision, KC Company, 4th Creative Party, Real D Square, Pino Entertainment Co.Ltd., Macrograph, Next Visual Studio, and Mage-fx. For production and sales, Dove & Hwalbin Entertainment, Mountain Pictures, XrisP, TubaN Entertainment, Film Line, and Mirovision Inc. have signed up to participate at the booth. Anyone interested in Korean films and/or working with Korean companies are welcome to visit the center.
The Ko-production in Beijing is a co-production project where Korean productions are introduced to local Chinese investors to seek partners for joint productions. This year, six projects were selected to participate. The participants will be placed in the Zone B meeting space in the China Millennium Monument from the 19th until the 20th from 9:30am to 6:00pm.
KOFIC is also holding a 2015 VFX Showcase of Korea in Beijing called ‘Fantasy, dreaming of it.’ Scheduled for Friday April 17th at 2pm in the Multifunction Hall 3 of Section A, it’s an opportunity to learn about Korean VFX companies, which are currently the strongest special effects partners to Chinese films. Four companies, Next Visual Studio, Studio MG, Digital Idea and Cocoavision, will share their own experiences on working in VFX and also about the opportunities of working on joint productions.
Regarding other Korean film activities at the Beijing International Film Festival, it has been revealed that Korean films The Whistleblower, Revivre, The Road Called Life and Director’s Cut will be screened at the event. Not only that, actor KWON Sang-woo, who recently worked on the Korea-China co-production Honey Enemy, will walk the red carpet during the closing ceremony. The festival dates are from April 16th until the 23rd.
Any copying, republication or redistribution of KOFIC's content is prohibited without prior consent of KOFIC.
Related People Related Films Related Company