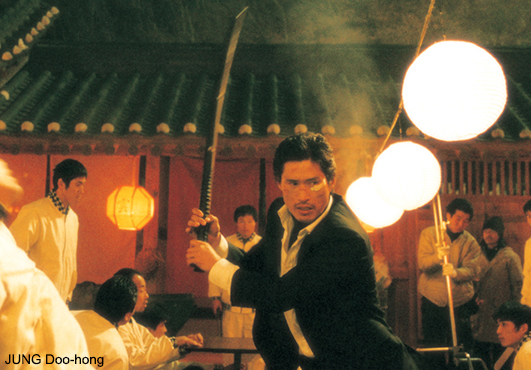 A special opportunity has been made to aspiring filmmakers to learn how to direct and choreograph action films from Seoul Action Film’s master JUNG Doo-hong. Korean Film Council (Chairman KIM Sae-hoon)’s Korean Academy of Film Arts is about to hold their first workshop for this year, the ‘Action Master Class with JUNG Doo-hong.’ Starting on March 30th until April 1st, the 3 day event workshop will go through the steps of making an action film.

Starting with RYOO Seung-wan’s The City of Violence (2006), to No Blood No Tears (2002), The Berlin File (2012), and KUNDO: Age of the Rampant, JUNG has been a major player in the history of Korean action films. Creating new action styles, the master class with JUNG Doo-hong at the KAFA+ workshop is a part of a program that started in 2013. Not only does it teach the theory behind directing action, the program is special because the selected students are able to produce a short action film with the instructor.
The master class has selected three individuals for each available role. For the directing position, the applicant must have directed at least one short, while the cinematographer should have at least two under their belt. After reviewing the applications and going through interviews, the final students selected for the action master class are also allowed to participate in the final KAFA+ workshop in November as well as the cinematography master class in June. The JUNG doo-hong master class will make teams of two, composed of one director and one cinematographer, who will be taught in detail by assigned instructors.
Any copying, republication or redistribution of KOFIC's content is prohibited without prior consent of KOFIC.
Related People Related Films Related Company Related News