The Time is Now Korean Films Are Going Global 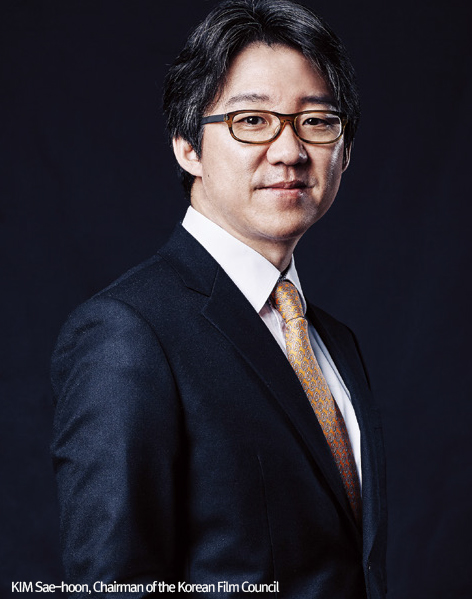 Hello, everyone. I’m KIM Sae-hoon, the new Chairman of the Korean Film Council (KOFIC). I’m very happy to be introducing the Korean films that were invited to the 65th Berlin International Film Festival. First of all, Korean film industry legend and internationally recognized auteur IM Kwon-taek’s 102nd film Revivre was invited to the very first Critics’ Week section, continuing the positive criticism it has received thus far.
HWANG Yun, who has consistently made documentaries that deal with nature and environment, is invited to the Culinary Cinema portion with An Omnivorous Family’s Dilemma. Short film Hosanna by NA Young-kil was selected for the international short film competition, representing fresh films from young directors. KIM Dae-hwan’s End of Winter , which won the New Currents Award at the 19th Busan International Film Festival, has been programmed for the Forum Section to meet audiences in Berlin. Last but not least, JK YOUN’s Ode to My Father , which has seen great popularity at the domestic box office by bringing in over ten million admissions, will be screening in the Panorama section. This film which looks at the lives of fathers in contemporary Korea is a culturally specific film, but because it deals with paternal and family love, I’m excited to see what the global response will be like. I look forward for the Korean films to be able to express sincerity and find relativity with all attendees at the Berlin International Film Festival. The Korean film industry continued to receive much attention in 2014 and reached over a hundred million admissions, three years in a row. KOFIC has put a lot of effort into the development of Korean cinema and globalization of our films. We were able to shake hands with the Chinese film industry which has been growing to become the largest industry in the world, while also expanding markets and promoting Korean films to South America and the Middle East. The interest in Korean films and culture is at its highest with the Hallyu wave, and it is the best time to globalize Korean films. The platforms in which films could be enjoyed have become more diverse than ever, and a system to work together over borders has given more creative freedom to filmmakers. The digitalization of films is also in fast progress.
We at KOFIC hope to keep up with the fast changing film world and assist the expansion of the Korean film industry. In order to actively move with the global market changes, the best way is to look outside of the frame. It is a good time to change courses in our ways of thinking. Following the agreement made between Korea and China in 2014, we are planning to put in our best efforts in order to successfully co-produce a global project as partners. Last year, the Korean animation The Nut Job had a successful performance in North America, and was also received well earlier this year in China. It is soon to be released in Japan. It was because animations are not bound by barriers such as languages and culture, and I believe this positive characteristic of animations could be applied to future Korean films.
The reason why Korean films have exponentially grown is because of the sincerity and passion behind their creators. KOFIC will work towards becoming the best partner in bridging the passion of Korean films to the world market.
Any copying, republication or redistribution of KOFIC's content is prohibited without prior consent of KOFIC.
Related People Related Films Related Company