A neighbouring industry that recently became an important partner to Korea is China. Ever since the signing of the Korea-China Co-production Agreement in July of this year during XI Jinping’s visit to Korea, the two industries didn’t waste any time in starting to work together. Educational subsidiary of the Korean Film Council (Chairman KIm Eui-suk, KOFIC), the Korean Academy of Film Arts (KAFA) has held its fourth year of a program called Global China Pre-Biz Program for filmmakers interested in entering the Chinese film industry. As China looks highly of Korean film industry’s planning, production, and human resources, Korean filmmakers also look positively into entering the neighbour’s industry.
Especially at this year’s Pre-Biz Program, directors and producers who have worked with or are working on projects with China participated in the session, providing valuable and substantial help to those attending the event.
The session was held from November 9th until the 13th for five days in Beijing. It was composed of an intro to Chinese film industry, and also a visit to major Chinese companies including Dailan Wanda Group, Le Vision Pictures, C2M Media, as well as China Film Co-Production Corporation where a discussion was held in regards to the business strategies Chinese film industries are focusing on at the moment. 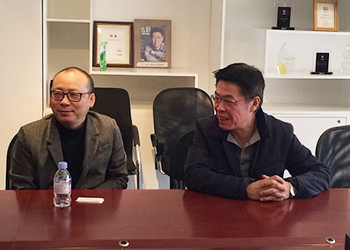 The participants claimed that, “the program gave us an opportunity to find and understand the specific needs of the Chinese market.” The major Chinese companies each had different ways of networking and strategies. Dailan Wanda Group and Le Vision Pictures who focus on production, investment and distribution, preferred hiring of Korean human resources instead of co-investment and their target audience was Greater China. Whereas C2M Media who is rather new in the industry preferred to base their projects on Korean creativity and preproduction strategies. Their goal was to adapt new ways of organization to create unique contents in China.
A participant at the Pre-Biz Program commented, “it was a great chance to learn about the differences between each Chinese companies’ visions in regards to co-productions.” Many participants also agreed that the program played a major role in identifying the needs of the Chinese film industry to make Korea-China co-productions and partnerships. KAFA’s Pre-Biz program and its impact will only grow larger as the Chinese film industry continues to grow exponentially.
Any copying, republication or redistribution of KOFIC's content is prohibited without prior consent of KOFIC.
Related People Related Company