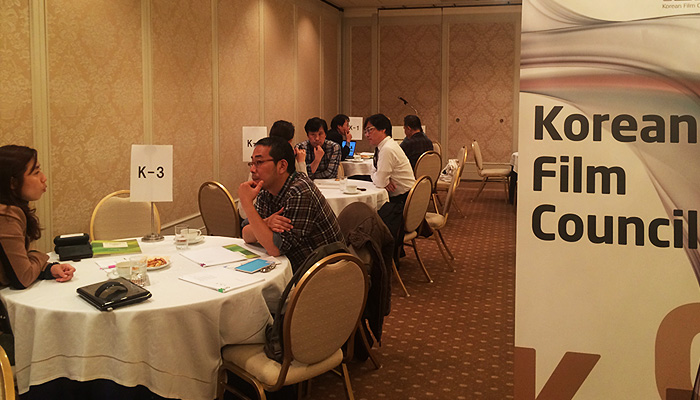 The Korean Film Council’s Ko-Production is a one-stop support program for international joint production program. The program began to support joint Korea-Japan production in 2012. Since then, the company has expanded to cover Korean filmmakers’ production with American, Japanese and French filmmakers. Ko-Production in Tokyo is an event connected to the TIFFCOM, a contents market of the Tokyo International Film Festival held every year after the Korean Film Council’s Film Industry Forum. This year’s last joint Korea-Japan international planning event ran at the Grand Pacific Le Daiba in Odaiba of Tokyo for three days from October 21 to 23.
The event, a developed form of the Korean Film Council’s joint Korea-Japan production project titled ‘Business Campus’ that kick off in 2007, has been held eight times and resulted in 51 joint Korea-Japan productions involving over 120 Korean and Japanese filmmakers. Among them, exemplary works are Cyborg She (2007), a KWAK Jae-yong film produced and released in Korea, China and Japan, Virgin Snow (2007), a HAN Sang-hee film released in Korea and Japan and Romantic Heaven (2008), a JANG Jin produced by K&J. Genome Hazard (2011), a KIM Sung-soo film produced by Apollon Cinema and Lotte with support from an international fund of UNIJAPAN was released at major theaters in Japan in 2013. A Midsummer's Fantasia, a JANG Kun-jae film produced by Mocushura with support from the Nara International Film Festival received good reviews. The film participated last year. 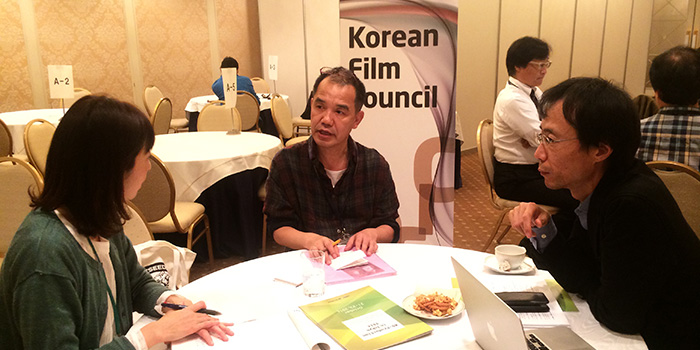 Four films were selected for this year’s joint Korea-Japan planning and development project. The four are Girl on a ASAKUSA Bridge, a film of Dong-A Production to be directed by KIM Jeon-han, Twin, a film of Montmar to be directed by KIM Jin-sung, O-Chun-Ki, a film to be directed by YOON Jae-yeon and produced by Fujimoto Shinsuke and Container to be produced by LEE Eun-kyung, the CEO of Zoafilms. Local Japanese producers and screenwriters reviewed and revised scripts for these works in June. Korean filmmakers took part in the October event with revised scripts and plans and had them finally reviewed by Japanese mentors and had meetings with local filmmakers.
On October 21, the first day of the event, they had a meeting with DAKAHASHI Nozomu, a producer of Japan TV which produces 12 films for the purpose of understanding Japan’s film production environment and production committee system. They also discussed the status of and an outlook on joint international production with producer KOIDE Masaki of RoBot.
The event results in a total of 68 meetings although October 22 and 23 suffered from inclement weather and were before the opening of the Tokyo International Film Festival and the event venue was far away from Rokbonki where the main event was taking place. Moreover, leading Japanese film productions and distribution companies such as Toho, Toei, Nikkatsu, Kadokawa, Asmik Ace and RoBot and film industry workers took part in the event, catching much attention from people. In particular, the active participation of producers from the joint production team at each company led to many meetings for business networks.

Over the last ten years, Korea conducted 241 joint production projects with other countries. Among them, 70 projects, about 30%, were between Korea and Japan. Taking into consideration of an increase in collaboration such as production and investment planning and Korea’s purchases of Japanese originals, joint production with Japan is a market that Korea should not miss and will be a rugged road ahead.

“Diversity was found despite the fact that participating companies were nearly the same as last year,” said LEE Eun-kyung, the CEO of Zoafilms. “This is because the event showed positive aspects such as an increase in interest in the online market and new contents and need for connection with China through Korea.”“People expanded and shared interest in joint Korea-Japan production at a time when Korea should enhance possibilities for joint Korea-Japan production,” LEE added.
“I hope that Korea and Japan, the most possible joint production partners, will realize more joint production,” said KENTA Fudesaka, the head of the International Exchange Group of the International Business Division at UNIJAPAN who emceed at a networking party co-hosted by the Korean Film Council, Ace and UNIJAPAN, promising next year’s event.
Any copying, republication or redistribution of KOFIC's content is prohibited without prior consent of KOFIC.
Related People Related Films Related Company