What strategies do Korea’s international sales agents have in the COVID-19 era?

In the aftermath of the COVID-19 pandemic, major film markets such as Cannes and Hong Kong moved online. In this unprecedented situation, how are sales agents promoting and selling Korean films abroad? This week we sit down with CONTENTS PANDA international sales head Jung-ha to talk about the changes in the foreign sales of Korean movies caused by the sanitary crisis. CONTENTS PANDA, which started its overseas sales business in 2015, came to prominence closing international distribution deals for Korean genre films such as TRAIN TO BUSAN (2016), The Villainess (2017), Psychokinesis (2018) and Peninsula.
With COVID-19, the situation seems to be really different for international sales of Korean movies.
Yes. The European Film Market of the Berlin Film Festival in February was the last time we had an offline market. Usually, it should have been followed by the Hong Kong International Film & TV Market (FILMART) and Cannes’ Marche du Film, but after Berlin, all the markets were moved online. FILMART was also delayed and kicked off online on August 26.
Was Cannes’ film market your first experience attending an online film market?
Yes. We had lots of plans for Peninsula in Cannes. We were thinking of going big on the international marketing aimed at offline buyers from around the world, so it was really a bummer that everything went against it. 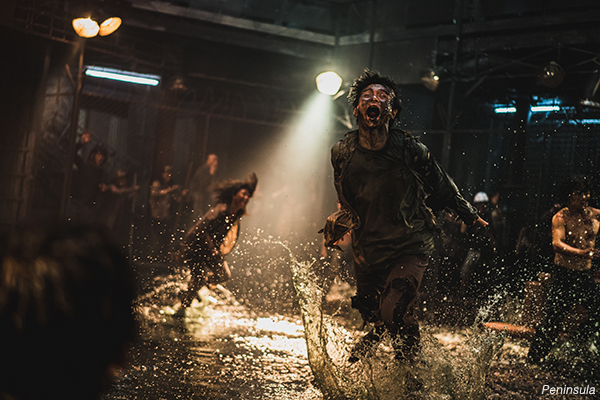 Peninsula was pre-sold in 190 countries, and it has been popular in Asian markets such as Taiwan, Singapore, and Vietnam. This is a good achievement in international sales, but I guess you would have expected this achievement to be on a larger scale.
Yes. TRAIN TO BUSAN (2016) was pre-sold to over 160 countries. When I was working on Peninsula, I set up right from the beginning a sales plan with the aim of having a simultaneous worldwide release. Since I had the confidence that it would go to Cannes, my priority was to sell out all its international territories before the festival. Having such plans for Peninsula, we prepared promo materials in advance. We thought it would be a hit if it could have a worldwide release. However, it became more complicated due to COVID-19.
Was there any specific reason for you to have a worldwide release in mind?
At the time of TRAIN TO BUSAN (2016), we could not have a simultaneous release in multiple territories. We pushed the ideas as much as possible, but [the buyers] were not completely convinced by the movie. However, in almost the majority of countries, the movie released the week after its opening in Korea, while it was exploding there. We thought expectation for Peninsula would be really high in the countries where TRAIN TO BUSAN (2016) had been a box office hit. East Asian countries such as Taiwan and Hong Kong were the countries where TRAIN TO BUSAN (2016) was the most successful. We tried to have Peninsula open in Taiwan and Hong Kong on the same day as in Korea, but unfortunately, the release in Hong Kong was delayed indefinitely as the territory faced a new COVID-19 outbreak. Fortunately, Taiwan is a country that has overcome the epidemic pretty well, and Peninsula has been doing very well there. It is on the verge of breaking the total haul of TRAIN TO BUSAN (2016), which was USD 12 million. In the case of Vietnam, the film recorded sales of over USD 3.5 million (as of August 19th), which was a little less than three times the lifetime gross of TRAIN TO BUSAN (2016). In Singapore, the opening haul exceeded that of TRAIN TO BUSAN (2016). It seems that we have set significant records in these countries. It’s a shame when I think of all the records we could have broken if it had been released all over the world on the same day.
A lot of the international sales work seems to have been moved online.
100% of it is now conducted online. Selling movies is a “push and pull” job. Buyers and sellers engage in a battle of wits in order to move forward with conditions that are favorable for both parties. It’s difficult to “catch” that when meeting on the phone or Zoom. In addition, simply meeting new people on Zoom or conducting sales through phone calls can only get you so far. Nevertheless, Peninsula is a special case. TRAIN TO BUSAN (2016) performed well, and it is that confidence that brought it there. The film was pre-sold on the basis of the synopsis only, without even having to show the screenplay. This is rarely the case. 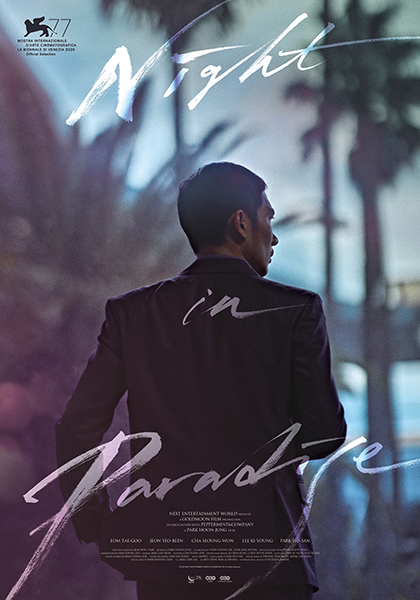 Are there any changes in the number of titles being sold or the film distribution fees? There seems to be a demand for lower fees.
It is true that there is such a demand because of COVID-19. However, lowering the amount now will only lower the bar for Korean films as a whole. The mood surrounding Korean movies was really positive until COVID-19 broke out. A new environment was created with TRAIN TO BUSAN (2016), and Korean films have come to the mainstream with PARASITE (2019) winning the Oscars. I could feel it firsthand in Berlin. I noticed a different reaction when selling Time to Hunt in Berlin. If it wasn’t for the novel coronavirus, Korean cinema itself could have received great attention in Cannes too. At this Venice International Film Festival, one of our titles, Night in Paradise, has been invited to be screened out of competition. In a way, our international team achieved a grand slam this year with Time to Hunt, Peninsula and Night in Paradise.
You must feel it’s a shame that COVID-19 broke out just when Korean movies were in the best position they have ever been.
Yes. In Asia, Korean films were already well established in part because of the Korean Wave. The outbreak occurred just when we were starting to see the positive response of the Western world to Korean movies in terms of sales too, as our titles were receiving more attention due to the influence of PARASITE (2019). It’s a pity that it is slightly slowing down right now because of the current situation. Genre films were the only Korean films that were successful in the non-Asian world. The films with action and specialized genres like The Villainess (2017) and The Gangster, The Cop, The Devil (2019). However, PARASITE (2019) proved that drama-oriented Korean films can also resonate. We noticed we were being contacted by buyers who had never bought Korean movies before. When I saw that companies of a certain size were contacting us, I realized that [the consumer base of Korean movies] had expanded. Our homework now is to figure out what to do to sign good deals in an online market. No one knows yet because we all lack experience. After attending a few markets, we might be able to find the right method.
Could it be that House of Hummingbird reflects foreign interest in Korean films that goes beyond genre titles? House of Hummingbird is receiving good responses from moviegoers in Japan and streaming platforms users in North America.
CONTENTS PANDA has a connection with House of Hummingbird (2019) as it became a partner for the ancillary rights of the title. When I was first contacted to represent House of Hummingbird (2019), I didn’t feel so confident since it was an art film. But I watched the movie and it was so good. I was 30-40 minutes into the movie when I answered I would do it. The film has won more than 50 awards at film festivals across the world. I particularly became conscious of the strong reaction to the movie at Tribeca, where the film had its North American premiere. I didn’t have to do anything, the calls kept coming. Such a case is unusual. We signed the deals without any trouble. It recently opened in Japan, and over 30,000 people watched it after 9 weeks of screenings. The box office gross is a little less than JPY 42 million (about USD 398,000). This is an exceptionally good performance for an independent film. The quality of the film was recognized on the festival circuit and sales went well. This is a case where we could have our cake and eat it too. As a movie fan, I’m glad the movie is doing well. 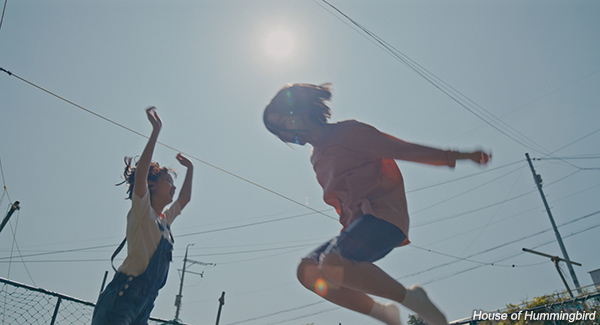 I want to hear more about your experience at the Cannes Film Market. How did it go?
As it was decided it would be held online, I was worried about which direction we should take with our preparations. There is a movie website called Cinando. You can put there your lineup and have meetings on Cinando. You can also upload and show your movies within the Cinando platform. A watermark is automatically generated, and you can restrict online screenings to specific times. But in reality, for us this is no different from sharing a link with our prospective buyers. Disclosing our film promo materials is something we did with a lot of caution since anyone registered on the website could see it. With this Cannes Market, we really wanted to test the waters. We plan to consider a more developed direction while attending a couple more film markets.
It’s a difficult question, but is there a way to differentiate Korean movies in the current situation?
Korean movies are on the cost-effective side. The production cost of TRAIN TO BUSAN (2016) was about USD 8 million, but I remember buyers watching the movie and asking me if it cost around 20 or 30 million. The film was so pleasant to look at! Korean cinema is a well-balanced film industry that is not limited to genre films but encompasses films made for festivals as well as various drama genres. In that respect, Korean movies have a certain competitiveness of their own. I think there will be no problem, even in this time when we are reducing face-to-face contacts, as long as we do not lose these basics.
What are your plans for the second half of the year?
We are currently focused on FILMART which started on August 26. The next film festival is the Busan International Film Festival Asia Contents & Film Market, which will be held online in October. And after that, the American Film Market. It is usually held in Santa Monica, but I guess it will be online. After experiencing a cycle like that, we will try to go along as we figure out how to deal with online markets.
Any copying, republication or redistribution of KOFIC's content is prohibited without prior consent of KOFIC.
Related Films Related Company Related News