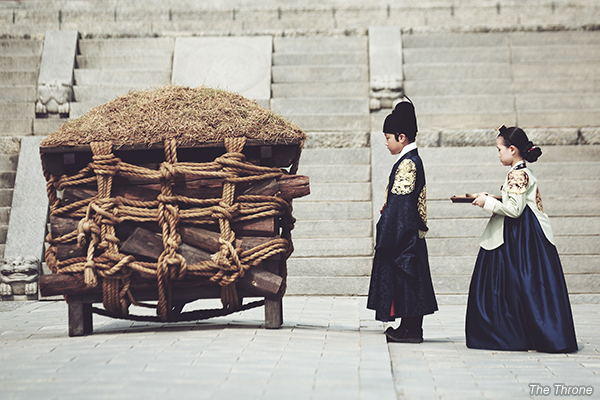 2015
| 125 MIN | Epic / Historical
DIRECTOR LEE Joon-ik
CAST SONG Kang-ho, YOO Ah-in, MOON Geun-young, JEON Hye-jin, KIM Hae-sook
RELEASE DATE September 16, 2015
CONTACT Showbox
Tel +82 2 3218 5500
Fax +82 2 3444 6688
Email sales@showbox.co.kr
When period drama expert LEE Joon-ik teamed up with SONG Kang-ho and YOO Ah-in for The Throne (2015), a glossy adaptation of one of the most famous historical episodes of the Joseon Era, it was always going to be a big event. In the wake of YOO’s role in Veteran (2015) – one of the top-grossing films of all time – just a few weeks earlier, anticipation for this Chuseok release only grew. Ultimately it would be successful, if not quite in the league of Masquerade (2012) or LEE’s own King And The Clown (2005), and as a lavishly realized, complex and uniquely Korean tale, it has taken its place in the halls of Korea’s great period dramas.
In 1762, King Yeongjo (SONG Kang-ho) faces his most difficult trial, two thirds of the way through his 51-year reign, the longest of any Joseon King. The Crown Prince (YOO Ah-in) marches to the King’s palace with sword in hand and murder on his mind, but does not follow through with his intentions. Nevertheless, the next day he is accused of plotting treason and is brought before the King. King Yeongjo finds himself in a dilemma – if his son is acknowledged and punished as a traitor, the Crown Prince’s family, including the King’s beloved grandson, will be cut off from the royal line. To avoid losing an heir, the King orders the Prince to take his own life, but his son’s followers protest, putting their own lives at stake. King Yeongjo feels he is left with only one choice - lock up the Crown Prince in a wooden rice chest without food or water.
In flashbacks placed between each of the historic eight days the prince remained in the chest, LEE brings us to the past to witness the son’s childhood, his father’s disappointment in his studies and later in his functions as Crown Regent, and finally the disintegration of their relationship following the bitter passing of the Queen Dowager.
Exploring the strict nature of Confucian codes, particularly filial piety, as observed by the Joseon Kingdom, The Throne (2015) offers a stark view of a rigid society in which the slightest of slights or the smallest of slips can have disastrous consequences. LEE shows us how temperaments within this kind of society can be formed and firmed into unbending characters, such as King Yeongjo. His life as an ardent scholar of Confucius has made him a strict head of state whose dogmatic views force him to make decisions that may go against emotions buried deep inside him. Yet the film makes clear the great pain this causes him, as he talks with regret about deceased members of his family and at several points seeks to abdicate the throne.
On the other hand, the Prince, whose posthumous name Sado gives the film its Korean name, spends his life trying to be a dutiful son, but his interests lie elsewhere, in the arts and sword-fighting. Unable to get his father’s approval, he goes off-the-rails and a complex but rigid set of rules and traditions set the stage for his inevitable destruction.
Korean period dramas are generally lavish affairs, but even within a genre known for lush photography, sets and costumes, The Throne (2015) stands out as a uniquely gorgeous production. Breathtaking and rigid compositions accentuate the film’s exploration of strict codes and rituals, while stunning lighting, production and costume design add weight, texture and drama to a story set almost exclusively within palaces.
Despite tackling a subject matter that could be unfamiliar and difficult for foreign audiences, The Throne (2015) was selected as Korea’s official submission to the Academy Awards (though it was not ultimately selected) and received top reviews from foreign critics.
Any copying, republication or redistribution of KOFIC's content is prohibited without prior consent of KOFIC.
Related People Related Films