Welcome to the Wonderful World of BONG Joon-ho 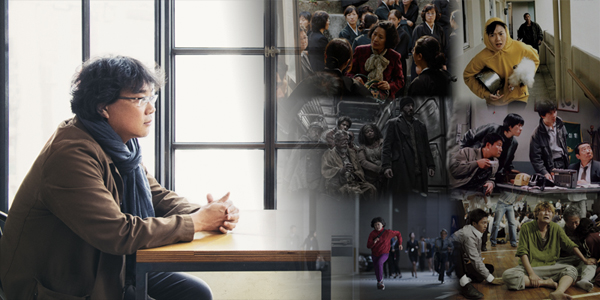 For well over a decade, the release of any new BONG Joon-ho film has become a major event, accompanied by feverish anticipation and often followed by critical adoration and commercial success. Never has this been more true than with the release of his latest film PARASITE, his seventh, which became the first Korean film to sweep up the Palme d’Or at the Cannes Film Festival and is currently burning bright atop the box office charts at home (giving BONG his biggest ever debut), where it has become the subject of an unusually intense media storm and welcomed over seven million viewers to date.
Part of the fun of waiting for a new BONG film is not being able to know what to expect. Plot details are typically kept close to the chest prior to release and BONG has a documented proclivity for sliding between genres, which makes his works tricky to categorize. In fact, the inevitable surprises found in his films are in themselves something we look forward to. However, though audiences can scarcely imagine what direction his narratives will take, they do come in a familiar package, as BONG has developed several trademarks throughout his almost 20-year career as a feature filmmaker. These include his wry sense of humor, his dynamic use of movement, and his common thematic concerns, chief among them social inequality. However, while these components also feature in works by other Korean filmmakers, he has a few trademarks which are unique to him alone.
Revenge isn’t everyone’s dish 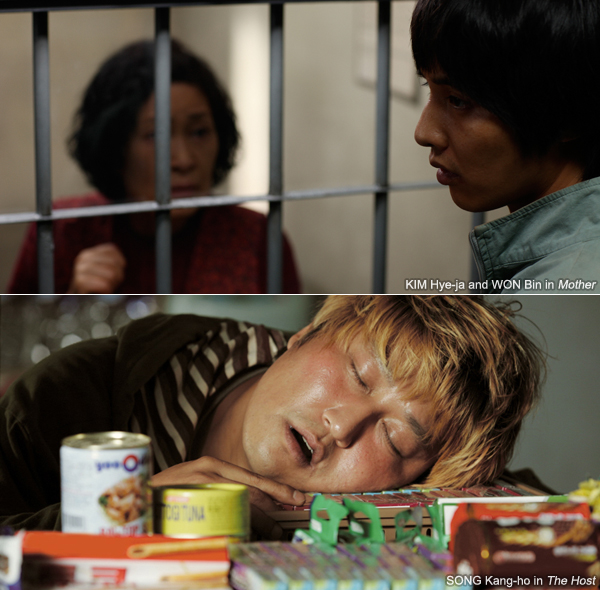 Korean genre films cover a broad scope of themes, but the one that is most readily associated with the country’s output is revenge, and while characters in BONG’s works have also occasionally exhibited vengeful tendencies, such as Jin-tae (JIN Goo) going after the golf players who hit Do-joon (WON Bin) with their Mercedez-Benz and drive off in Mother (2009), for the most part they act out of necessity and avoid retribution. On the surface, most of his leading characters appear rather dry, but behind their stoic or aloof nature, one can also find humanism. They will do everything in their power to save or protect someone, often beyond the scope of law, but they generally don’t seem to have a desire to get back at people, no matter how unfairly they’ve been treated.
BONG’s narratives are typically launched by terrible acts such as murder (Memories Of Murder, 2003) or abduction (The Host, 2006), and once these are resolved, though generally unsuccessfully, characters will once again go about their normal business (at least as normally as the stories will allow). In a harsh world that doesn’t afford everyone the same opportunities, they only want to carve out their own small space and live peacefully, as we can see when Gang-doo (SONG Kang-ho) continues to run his riverside snack stand at the end of The Host. Likewise, rather than harbor dreams of revenge against the Mirando Corporation, all Mija (AHN Seo-hyun) wants to do in Okja (2017) after she retrieves her pet super pig is to go back to the mountains and lead a normal life.
Getting the full picture from the flat screen 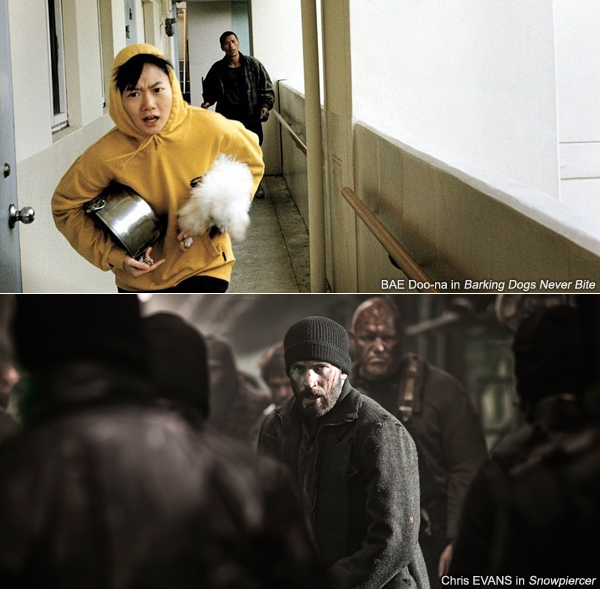 Although virtual reality technology may change things in the future, for the moment, cinema remains a medium projected on a flat surface. Director BONG frequently reinforces the two-dimensional aspect of the projected image through his tight compositions. Characters will often stare in the same direction as an ensemble, or run towards the edge of screen, while standing in front of a perpendicular background. The former is an image that appears frequently with the detectives of Memories Of Murder, as they carry out their investigation in a basement interrogation room. Meanwhile, Hyeon-nam (BAE Doo-na) dashing after a dog killer through the open hallways of an apartment block in Barking Dogs Never Bite (2000) is a good example of the latter.
To achieve this very flat look, he will often film scenes from a distance with a long lens, a technique he most famously used in the final shot of Mother, as the unnamed title character (KIM Hye-ja) dances her pain away on a tour bus rushing through the countryside, as the zoomed-in camera steadily loses her in a crowd of middle-aged revelers.
Yet the film that necessarily highlights BONG’s affinity for compressed spaces the most is surely Snowpiercer (2013), which features a story set completely on a linear trajectory. Characters are forced to move along predetermined lines - left of screen to retreat, or right to forge ahead. BONG uses lateral momentum to create a considerable amount of catharsis as Curtis (Chris EVANS) breaks through the ranks to press his forehead against a guard’s rifle to prove it isn’t loaded in the scene that signals the start of the rebellion on the train.
The thrills of ordered chaos 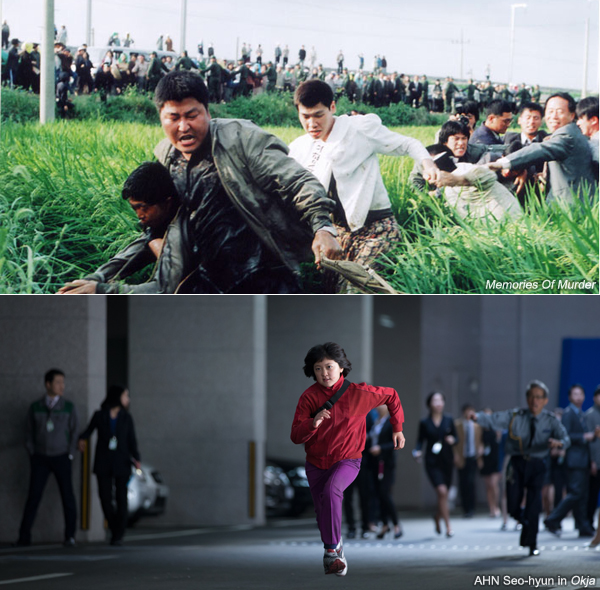 Stylistically, BONG employs several striking techniques in his films and these are liberally combined in some of the most audacious scenes in his filmography. Large crowds, dynamic movement and incompetent authority figures are just some of the elements that come together in sequences suffused with an infectious and ordered chaos.
In the third scene of Memories Of Murder, Detective Park (SONG Kang-ho) arrives at a crime scene in a field, which is already buzzing with dozens of detectives, reporters and civilians. During this bravura single shot, evidence is trampled on by a tractor, CSI experts repeatedly stumble down a hill and everyone seems out of their element. The ‘sliding fools’, as they’re called in the film, appear in many of BONG’s films. You’ll find them wearing hazard suits and falling down while a family wails with grief during a funeral scene in a gymnasium in The Host, or falling over each other as they chase a super pig in Okja.
The aforementioned scene in Okja is probably the most ambitious sequence the director has ever undertaken. Starting as Mija emerges from a subway station in Seoul and ending as she and Okja careen through the aisles of an underground Daiso store, this breathless and dazzling sequence is fueled by Mija’s sheer determination, extended by the woeful ineptitude of Mirando cogs and ends with a beautiful crescendo of humanity as the Animal Liberation Front comes to rescue with rainbow-colored umbrellas, while their leader (Paul DANO) removes a piece of glass from Okja’s paw.
When the familiar gives rise to the unexpected 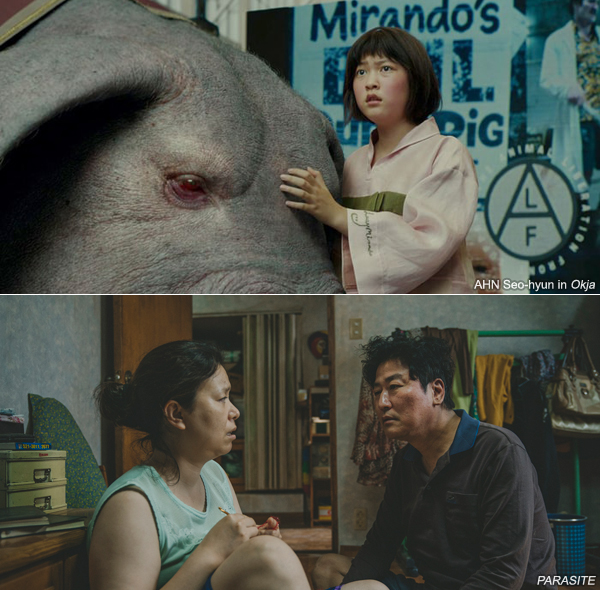 BONG typically remains faithful to his characters in his films, who tend to behave in accordance with what we’ve already seen from them. Where the manifold surprises in his films emerge is when these people are placed in unique situations. As his films swerve into unfamiliar territory, the conundrums confronted by these characters and the choices they make bring us down new and unexpected trajectories.
A family of merchants becomes an unlikely gang of fugitives and monster trackers in The Host, while a teenager from the Korean countryside jumps onto a moving bus and eventually becomes a focal part of a New York parade in Okja. In PARASITE, as a minor unexpected event occurs, one character asks another “What do we do?”, to which the latter responds, “I don’t know, I didn’t plan for this.” This scene, which signals a series of events that are all but impossible to predict in his latest film, perfectly encapsulates BONG’s ethos as a filmmaker. By arranging familiar elements in an unfamiliar way, he forces his characters to react in an unexpected manner.
Any copying, republication or redistribution of KOFIC's content is prohibited without prior consent of KOFIC.
Related People Related Films Related News