Quiet Victory for BATTLE OF JANGSARI over BY QUANTUM PHYSICS 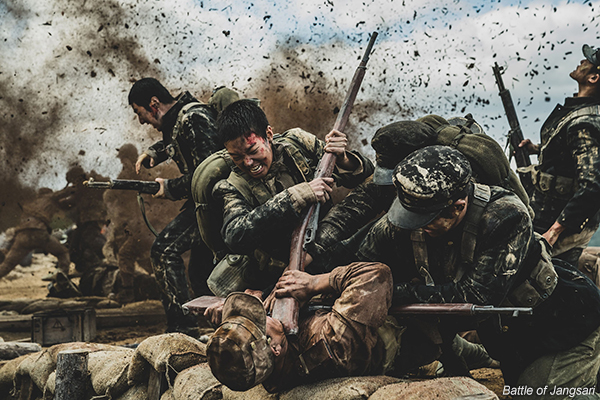 A pair of new titles raised the local market share edge to 79% but weren’t enough to keep overall admissions up as business slowed 10% week-on-week with 1.45 million entries recorded over the last weekend of September.
The Korean War drama Battle of Jangsari, featuring local star KIM Myung-min and Hollywood star Megan FOX in a supporting role, debuted atop the box office with a subdued 485,000 sales (USD 3.44 million) over the weekend and a total of 690,000 tickets (USD 4.57 million) sold over its first five days.
Local crime thriller By Quantum Physics: A Nightlife Venture kicked off its run in second place as it welcomed 276,000 viewers (USD 2.01 million), with 388,000 admissions (USD 2.65 million) recorded since its Wednesday bow.
Still a presence on the charts was the Chuseok hit The Bad Guys: Reign of Chaos, which slowed 60% in its third frame during which it added 259,000 spectators (USD 1.06 million), raising its haul to a mighty 4.44 million entries (USD 32.03 million).
Quentin TARANTINO’s latest critically acclaimed film Once Upon a Time in Hollywood, with Leonardo DICAPRIO and Brad PITT, had a soft opening in fourth place with 123,000 tickets (USD 911,000) sold. The Cannes competition entry found 197,000 viewers (USD 1.33 million) over its first five days in theaters.
Also with Brad PITT, the sci-fi Ad Astra stumbled 84% in its sophomore frame, as it filled another 49,000 seats (USD 358,000), which raised its total to 488,000 admissions (USD 3.58 million) over 11 days.
A pair of star-driven releases in the form of romcom Crazy Romance with KONG Hyo-jin and KIM Rae-won and the bromance Man of Men with SUL Kyung-gu and CHO Jin-woong should help lift business this coming week, but the real boost should come from the highly anticipated DC Comics title Joker, which is coming off of a Golden Lion win at the Venice International Film Festival.
Any copying, republication or redistribution of KOFIC's content is prohibited without prior consent of KOFIC.
Related People Related Films Related News