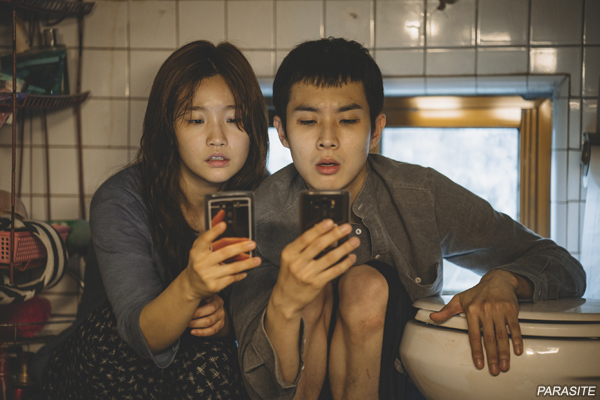 A media frenzy and national pride have set the May box office on fire, as admissions almost doubled to 4.04 million over the previous weekend, an unusually high number for this time of year. Moreover, the local share surged to 76%, despite the opening of a new Hollywood blockbuster, which is topping the rest of its global markets this session while struggling in Korea.
Hot from its historic Palme d’Or win at the Cannes Film Festival, the first such win for a Korean filmmaker, PARASITE opened to a staggering 2.79 million entries (USD 20.75 million), a record for director BONG Joon-ho, unseating 2013’s Snowpiercer (2.27 million viewers), and the second highest ever debut for star SONG Kang-ho, just behind 2017’s A Taxi Driver (USD 2.92 million viewers). Over four days, the film has attracted a massive 3.37 million spectators (USD 24.71 million) and with uniformly gushing reviews and strong word of mouth, the film is poised to continue pulling in large crowds.
Last week’s top film Aladdin remained very strong on the charts, dipping just 8% as families continued to be drawn in by its spell. With another 737,000 entries (USD 5.33 million) banked in second place, the Disney update has now reached 2.15 million admissions (USD 15.25 million).
Despite a global launch in the USD 180 million range, the big-budget creature feature Godzilla: King of the Monsters mustered a meager 181,000 sales (USD 1.44 million) during the weekend in Korea, with just 301,000 tickets (USD 2.2 million) sold since its Wednesday opening. Previous entries in the Legendary series have also struggled in the market, but even so this proved to pale in comparison, down 43% from 2014’s Godzilla (from a 4-day opening) and a massive 70% down from the reasonably successful Kong: Skull Island.
Slowing 78% in its third frame was the local thriller The Gangster, The Cop, The Devil, which notched another 159,000 sales (USD 1.21 million), giving it a strong 3.28 million seats (USD 24.08 million) filled to date.
Closing out this week’s top five was the year’s first K-Horror 0.0MHz, which stalled with a 63,000 admissions (USD 458,000) debut and 107,000 sales (USD 717,000) since its Wednesday launch.
A pair of major foreign titles will enter the fray in the coming days as X-Men: Dark Phoenix and Rocketman hope to put up a good fight against the dominant PARASITE, which is well positioned to maintain its edge on the charts.
Any copying, republication or redistribution of KOFIC's content is prohibited without prior consent of KOFIC.
Related People Related Films Related News