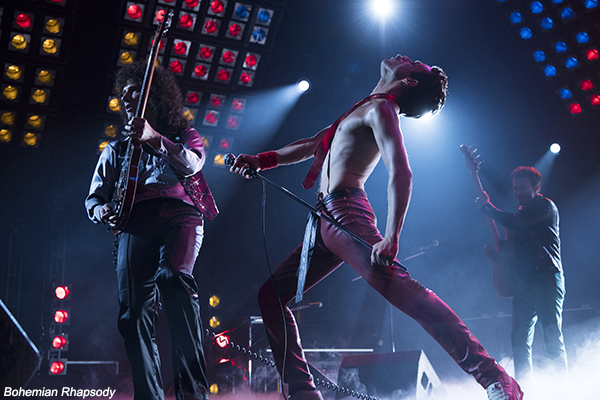 In the absence of major new titles, the chart was largely the same as holdovers performed well. Business was down marginally to 2.12 million sales, while Hollywood took back the market share advantage after clinching 51% of sales.
In its seventh weekend, the musical sensation Bohemian Rhapsody has done the impossible, claiming the top spot once more after slowing just 7% week-on-week. The film welcomed 554,000 spectators (USD 4.38 million) to bring its total a whisker away from the eight million tickets milestone, with 7.94 million sales (USD 61.03 million) recorded to date.
Down one spot after two weeks on top was the local financial thriller Default, which lost just 26% of its audience. The film took in another 464,000 entries (USD 3.61 million) to push its total to a strong 3.54 million admissions (USD 25.79 million).
LEE Kwon’s well-reviewed thriller Door Lock remained in third as it slid a reasonable 42% in its second week, drawing in 327,000 viewers (USD 2.43 million). With 1.43 million tickets (USD 10.4 million) sold to date, the film may be a modest hit for distributor Megabox Plus M.
The highly-rated superhero animation Spider-Man: Into the Spider-Verse debuted in fourth place with 298,000 sales (USD 2.23 million) over the weekend and 390,000 entries (USD 2.87 million) overall. With exceptional word-of-mouth and reviews, the film has a chance to stay on the charts, despite the heavy end-of-year competition around the corner.
Despite a small opening last week, Hollywood fantasy film The Nutcracker and the Four Realms held on reasonably well after sliding just 46% in its sophomore frame, which brought in 105,000 viewers (USD 772,000) to push its total to 390,000 spectators (USD 2.98 million).
Just outside the top five, KANG Hyoung-chul’s Korean war tap-dance drama Swing Kids, distributed by Next Entertainment World, scored 73,000 entries (USD 569,000) during weekend previews ahead of its full launch on Wednesday.
Aside from Swing Kids, this week’s pre-Christmas frame will also welcome Showbox’s crime saga The Drug King with SONG Kang-ho and the DC tentpole Aquaman, which has been drawing sensational business in neighboring China. Regardless of the order of the chart, it should be an exceptionally busy weekend for theaters.
Any copying, republication or redistribution of KOFIC's content is prohibited without prior consent of KOFIC.
Related People Related Films Related Company Related News