Feb 13, 2018
Admissions Down Ahead of Holiday Surge 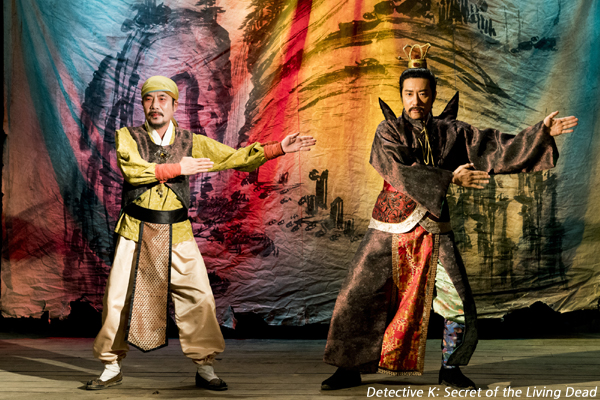 A local period film timed for the upcoming Lunar New Year holiday led the chart as Korean films made up 70% of sales at the box office, while the calm before the holiday storm amounted to a quiet weekend with just 1.64 million tickets sold overall.
Showbox entered the Lunar New Year fray a week early with Detective K: Secret of the Living Dead, the third entry in their popular period investigator series headlined by KIM Myung-min and OH Dal-su. The film opened with 786,000 sales (USD 6.03 million) over the weekend, and a total of 965,000 entries (USD 7.27 million) over five days. The opening is a slight improvement on 2015’s Detective K : Secret of the Lost Island, but while both of the previous entries experienced significant increases in their sophomore weekends (which also fell during Lunar New Year festivities), it is unclear if this latest installment will experience the same kind of uptick as it faces much stronger competition.
Still a presence in its fourth weekend on the charts, local heart-warmer Keys to the Heart saw its take cut in half as it remained in second and brought in another 223,000 spectators (USD 1.73 million), boosting its total to an impressive 3.22 million viewers (USD 23.95 million).
Coco’s rank was also unchanged as it eased 45%, with another 151,000 entries (USD 1.16 million) bringing its admissions total to 3.3 million (USD 24.02 million). Fellow animation Paddington 2 opened in fourth with 105,000 admissions (USD 760,000) during the weekend, with 126,000 tickets (USD 912,000) sold since its Thursday bow.
In fifth place was Along with the Gods: The Two Worlds (2017), which welcomed another 72,000 viewers (USD 567,000). This raised its total to 14.33 million spectators (USD 106.3 million), pushing the fantasy epic past Ode to My Father (2014) to make it the second most successful Korean film of all time, behind only Roaring Currents (2014).
Two local Lunar New Year releases step up to the plate this Wednesday, with CJ Entertainment’s thriller Golden Slumber looking to outperform Lotte Entertainment’s period drama Heung-boo: The Revolutionist, but both will likely take a backseat to the behemoth that will be Black Panther. The latest installment in Disney’s Marvel series was partially shot in Busan and has already built up a huge lead on the reservations chart, accounting for two thirds of all presales as of Monday morning.
Any copying, republication or redistribution of KOFIC's content is prohibited without prior consent of KOFIC.
Related People Related Films Related Company