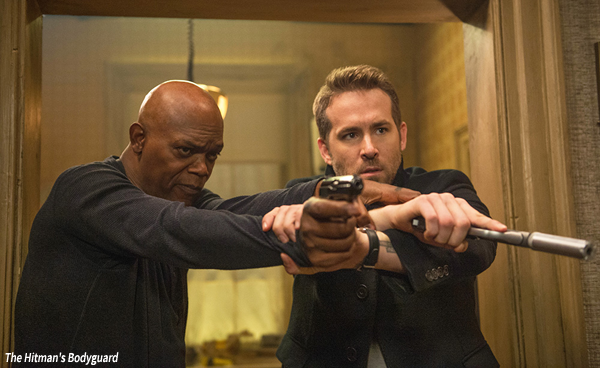 Cinema attendance cooled with the weather over the weekend as the exhibition industry settles into a brief calm before the lengthy holiday season in early October. Admissions clocked in at 1.86 million viewers while Korean product maintained a market share lead but was just short of a majority with 46%.
Coming in first place after an unusually long and aggressive marketing campaign was US action-comedy The Hitman’s Bodyguard, which brought in 556,000 viewers (USD 4.28 million) over the weekend and 777,000 spectators (USD 5.64 million) since its Wednesday bow. The film has been well received by the public but will have a hard time maintaining its rank with heavy competition on the way.
Midnight Runners rose one spot after slipping a reasonable 44% in its fourth frame. The Lotte Entertainment title added 286,000 admissions (USD 2.10 million) as its total rose to 5.38 million entries (USD 37.38 million). The cop comedy is now the fifth most well-attended film of the year.
Opening with a tepid 249,000 sales (USD 1.89 million) in third place was Luc Besson’s sci-fi fantasy Valerian and the City of a Thousand Planets. In five days the film has sold 370,000 tickets (USD 2.62 million).
As it begins its roll out of theaters, summer hit A Taxi Driver slowed 55% as it welcomed another 238,000 viewers (USD 1.75 million), bringing its total to 11.86 million spectators (USD 82.55 million), past the lifetime total of TaeGukGi: Brotherhood Of War (2004) and into the all time top ten for Korean films.
Crashing four spots and 77% in its second frame was PARK Hoon-jung’s North Korea thriller V.I.P., which mustered another 136,000 admissions (USD 1.01 million) for an underwhelming total of 1.32 million entries (USD 9.31 million).
Horror remake IT and local serial killer thriller MEMOIR OF A MURDERER both open this week and should breathe a little life into the slow September box office.
Any copying, republication or redistribution of KOFIC's content is prohibited without prior consent of KOFIC.
Related People Related Films Related Company