Korea Gets a Look at NOW YOU SEE ME 2 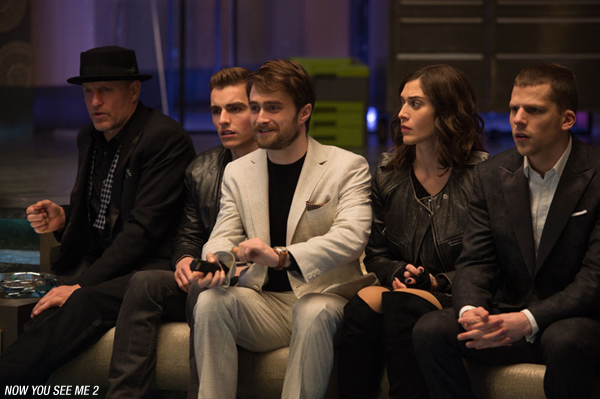 The summer box office is beginning to heat up in Korea, with just over three million admissions recorded over the weekend. Hollywood maintained the edge with a 61% share ahead of the high season for local films, which will likely command the charts throughout the next month.
Opening big in first place was con artist thriller Now You See Me 2, which brought in 1.08 million viewers (USD 8.03 million). The film opened with limited previews last week and has now accumulated 1.74 million admissions (USD 12.65 million) to date. Despite its strong start, the film is unlikely to remain on top of the charts with several big releases poised to unseat it in the coming weeks.
Though it doesn’t open until the 20th, YEON Sang-ho’s zombie thriller TRAIN TO BUSAN, which debuted to strong reviews at the Cannes Film Festival this year, managed to score a second place finish on the strength of well-attended pay previews. The film logged 559,050 viewers (USD 4.28 million) and is already well ahead of the competition on the reservations chart.
Dropping 38% in its sophomore session was Disney-Pixar’s Finding Dory, adding 525,147 spectators (USD 3.75 million) to bring its total to 1.76 million viewers (USD 12.65 million). With no major children’s films due out for a few weeks, the animation is set to add to that total but won’t rival its record US haul, where it is already the most successful animated title of all time.
Also down, after a 47% decline was the local period film Seondal: The Man who Sells the River. The film sold another 414,413 tickets (USD 3.02 million), bringing it to 1.8 million admissions (USD 12.66 million).
Sneaking into fifth place was the US shark survival thriller The Shallows, which opened with 158,367 viewers (USD 1.19 million) and 216,400 spectators (USD 1.57 million) over five days. Just behind was the KIM Hye-soo family dramedy Familyhood with 128,806 viewers (USD 961,955), pushing it over the two million admissions (USD 14.44 million) mark.
Topping the diversity chart was the Jake Gyllenhaal thriller Demolition with 15,605 tickets (USD 118,209) sold over the weekend and 25,154 admissions (USD 182,704) since its Wednesday start.