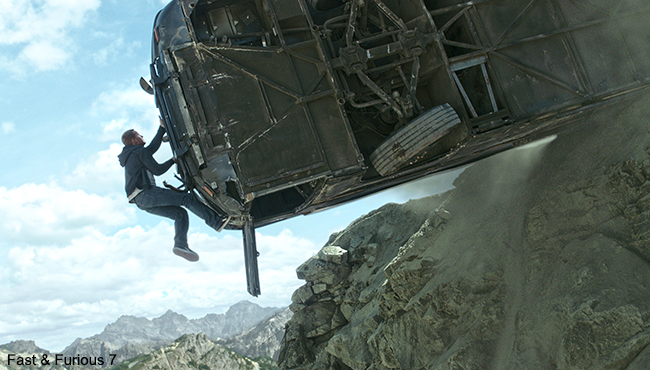 Weekend ticket sales for Fast & Furious 7 was 908,316 with cumulative count at 117,128, and the seventh installment charged to the top place on the box office in its first week of release. This record is three days faster than the successful performance of Kingsman: The Secret Service (hereafter Kingsman) who is just about to reach 6 million admissions. With the handicap of R-rating for Kingsman, this might be the reason why Fast & Furious 7 is performing better with a rating of 15.
Up until now, the Fast & Furious brand performed mediocre in Korean theaters in comparison to North America. But with the seventh edition taking the crown in the box office, the series is now put into a new light. With already 117,128 ticket sold in the first week, it seems to be a matter of time before the new installment beats its predecessor, The Fast and the Furious 6 which marked 179,457 admissions during its run. With the film being the largest in scale to date with high levels of action and the fact that it is the last film with actor Paul Walker may be some reasons why the numbers are so high.
Domestic film Twenty gave way to Fast & Furious 7 for the top crown, but it has been performing well and upon bypassing 2.2 million admissions in its 2nd week, it reached over the breakeven point. Three young actors KIM Woo-bin, LEE Jun-ho and KANG Ha-nuel with newcomer director LEE Byoung-heon, received positive criticism and many look forward to the film reaching the 3 million milestone. As domestic films have been weak in the last little while, the performance of Twenty is noteworthy. None of the four new releases Song One, Pet Pals in Windland, It Follows or Wonders were able to beat Twenty and could only settle with the 7th to the 10th place on the chart.
Even with the strong runner Fast & Furious 7 in the game, Kingsman is still putting up a good fight. Weekend admissions count was at 117,774 to add up to a cumulative ticket sales of 5,913,842. With the ongoing strong performance of Kingsman, many are paying attention to see if it’ll beat the record made by the all time 10th most popular international film in Korea, The Dark Knight Rises, which recorded 6,396,615.
Any copying, republication or redistribution of KOFIC's content is prohibited without prior consent of KOFIC.
Related People Related Films