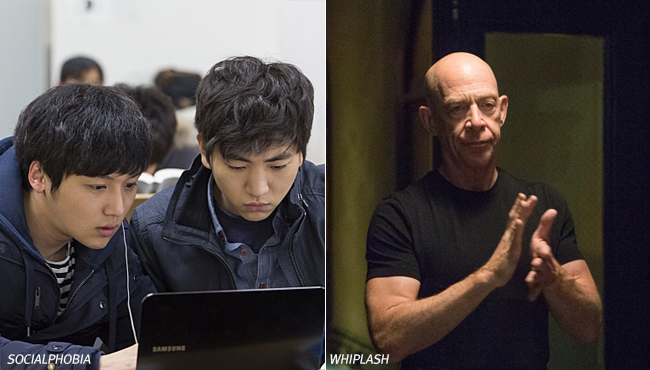 A domestic indie film is putting up a good fight in midst of new releases. Socialphobia has brought in 78,351 audiences over the week and is standing at 230 thousand in ticket sales. Within the first two weeks of its release, it had already bypassed the best performing alternative film from last year, Han Gong-ju, which recorded 220 thousand. Since there weren’t any hit titles after My Love, Don’t Cross that River, more eyes are on Socialphobia. The film is currently sitting at seventh place in the regular box office.
Whiplash is doing very well and has taken the top spot in both the regular and alternative box offices. In its 2nd week of release, weekly admissions were at 53,579. Unfortunately, Birdman wasn’t able to get a boost from the Academy Awards and fell off the chart, while Whiplash is keeping strong. Cumulative admissions bypassed 800 thousand and hitting a million seems likely. This is another music-based film that is getting much love from Korean audiences following Begin Again.
There were some new releases as well. When Marnie Was There has recorded 22,748 admissions and took 3rd place on the alternative box office while a French foodie film Haute Cuisine sold 11,805 tickets and is sitting at 4th place. A film festival favorite Andrey Zvyagintsev’s Leviathan is at 6th and the re-release of Charlie Chaplin’s Modern Times took 8th spot.
Any copying, republication or redistribution of KOFIC's content is prohibited without prior consent of KOFIC.
Related Films