Oct 11, 2013
Hope outperformed Tough As Iron starring YOO Ah-in, a Korean Cultural Wave star at the box office. According to the integrated ticket sales network of the Korean Film Council on October 10th, Hope, the comeback film of LEE Joon-ik, following a two-and-a-half-year break, topped the box office by drawing 1.21 million viewers in total across the nation up until October 9th. LEE previously directed The King and the Clown (2005) and Radio Star (2006).
Hope, starring SEOL Kyung-gu and UHM Ji-won, is a human drama about the girl So-won, who suffered sexual violence, and her family as they try to heal the scars and settle down. At the beginning of its release, Hope was somewhat relegated by Tough as Iron which opened on October 2nd along with Hope. But Hope turned the tide thanks to word of mouth. Hope recorded 210,000 admissions, the daily highest during its screening period on October 9th, a public holiday. Hope increased its ticket sales by chalking up a 16% increase from its October 3rd tally of 187,804 admissions or its Sunday tally of 182,675 admissions. Hope is popular not only among Korean moviegoers but also among overseas film festivals and film buyers. Hope was officially invited as the opening film of the 8th Korean Film Festival in Paris by the Korea-France Visual Cultural Exchange Association. It was also sold to five Asian countries - Japan, Hong Kong, Singapore, Malaysia and Indonesia at the Asian Film Market during the 18th Busan International Film Festival. 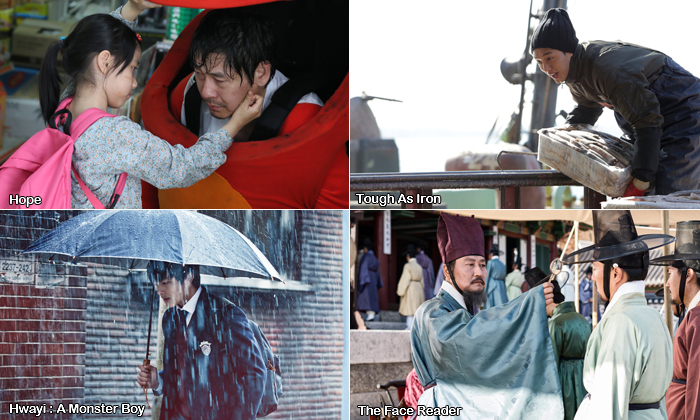 Tough as Iron by AHN Gwon-tae, who made My Brother (2004) is struggling at the box office. Tough as Iron starring YOO Ah-in and KIM Hae-sook posted 960,000 admissions until October 9th. YU starred in Punch while KIM in The Thieves and Thirsty. Tough as Iron ranked first on its opening day but was pushed to second by Hope. Moreover, the number of screens for Tough as Iron has sharply dropped since October 9th when Hwayi: A Monster Boy hit screens. Hwayi: A Monster Boy is the first feature film that director JANG Joon-hwan has made in the ten years since Save the Green Planet. It seems that extremely cliché narratives had a negative impact on the box office performance of Tough as Iron despite good acting by YOO Ah-in, KIM Hae-sook and JUNG Yu-mi.
The Face Reader has also been performing well. The period film opened on September 11th and recorded a total of 8.87 million audiences as of October 9th, getting closer to surpassing the milestone of nine million admissions.  A prequel novel of The Face Reader was recently released and moved 20,000 copies thanks to the film’s better-than-expected box office performance. A TV series of The Face Reader will be produced, setting a good example of “one-source, multi-use.”
On the other hand, The Spy: Undercover Operation starring SEOL Kyung-gu and MOON So-ri, and Snowpiercer by BONG Joon-ho recorded 3.45 million and 9.33 million admissions, respectively, entering their final stages for their box-office runs.

Among Hollywood films, The Conjuring has enjoyed a sizable lead. The low-budget horror film by James WAN had attracted a total of 2.13 million spectators across the nation until October 9th. The Conjuring became a sleeper hit in early October while breaking the 14-year-old horror film record of 1.6 million audiences held by The Sixth Sense that was released in Korea in 1999. 170,000 viewers bought tickets to Prisoners, a well-made Denis Villeneuve thriller starring Hugh Jackman and Jake Gyllenhaul. Villeneuve previously directed Incendies (2010).
At the diversity film box office, Our Sunhi directed by HONG Sang-soo is continuing its slow but steady run. Our Sunhi broke the record of 57,231 admissions held by Hahana that won the Grand Prize in the Un Certain Regard Section of the Cannes International Film Festival in 2010 by drawing 62,000 audiences until September 9th.
By TAE Sang-joon 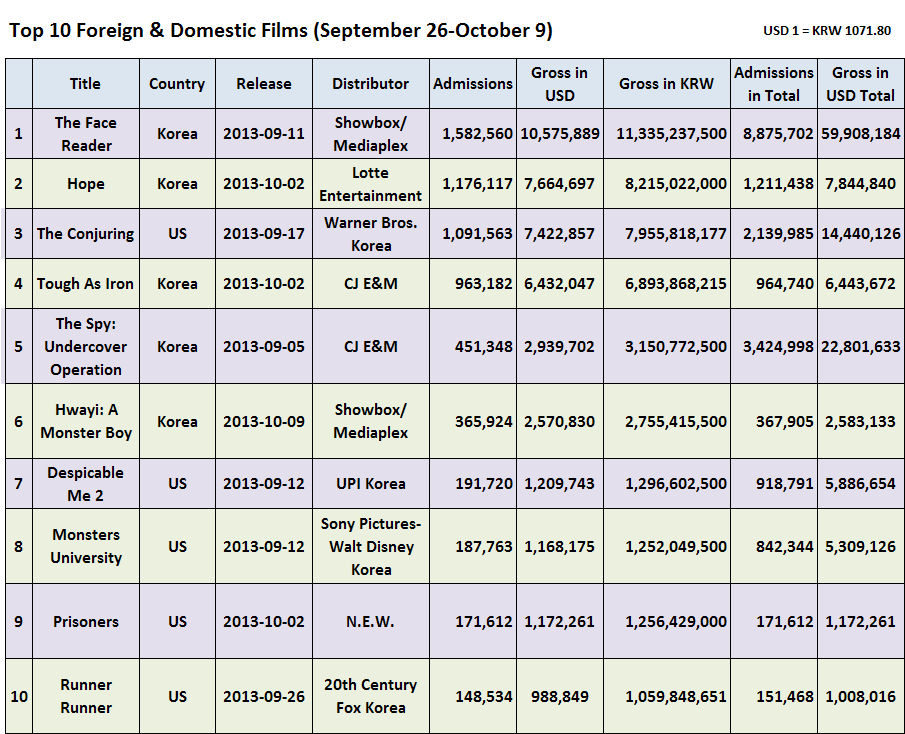