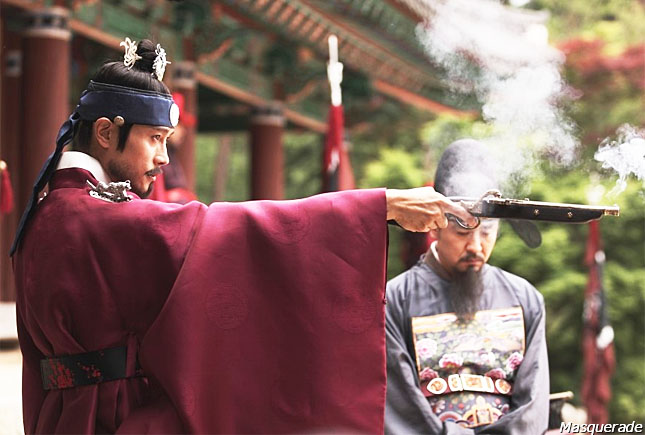 Overall box office figures declined in the middle part of October, compared to the Chuseok holiday season in late September and early October.
Nonetheless, the same film remained at the top of the chart: period drama Masquerade, by director CHOO Chang-min.
With interest in the work still running high, and no major competitors emerging, Masquerade sold just under 3 million tickets over the past two weeks. With an accumulated total of 9.6 million admissions (worth approximately $63 million), it is now quite close to becoming the second Korean film of 2012 after The Thieves to break past the 10 million admissions mark.
The film stars LEE Byung-hun in a dual role as the Joseon Dynasty king Gwang-hae and a jester recruited to serve as his body double. LEE was recently nominated for a Best Actor prize at the annual Grand Bell Awards.
A pair of new Korean films took the #2 and #3 slots, well behind Masquerade. Ghost Sweepers is the latest film from director SHIN Jung-won, who has drawn attention for his distinctive mix of horror and black comedy in films like Sisily 2km (2004) and Chaw (2008).
This new film tells the story of a dark spirit that overruns a small Korean village. The nation's shamans all gather to fight against it, but most flee in the face of the spirit’s unusual power. Only five shamans remain behind, together with a journalist who has been sent to cover the event. Distributed by N.E.W., Ghost Sweeper fell short of expectations with 750,000 admissions in its first two weeks. With the film losing momentum, it appeared highly unlikely to break the 1 million admissions mark.
By contrast, A Company Man starring the popular SO Ji-sub sold almost the same number of tickets in a single week. From debut director LIM Sang-yun, the film tells the story of a hitman working within an organization that is unlike any other large company. When he falls in love with a woman and start life over with a new profession, he becomes targeted by his former colleagues. The film co-stars LEE Mi-yeon, KWAK Do-won, KIM Dong-jun, and veteran LEE Gyeong-yeong.
The film Dangerous Liaisons is officially a Chinese production, but it involves a significant degree of Korean talent both in front of and behind the camera. It is directed by HUR Jin-ho (Christmas in August), and is in fact the second time that HUR has directed a film in China after A Good Rain Knows. Joining him on the shoot were cinematographer KIM Byeong-seo, editor NAM Na-young, and composer CHO Sung-woo. In addition, major star JANG Dong-gun takes a leading role opposite Chinese actresses ZHANG Ziyi and Cecilia CHEUNG. Nonetheless, the film performed weakly in its first seven days, taking 204,555 admissions. It has also somewhat underperformed in China, although its total to date of US $9.5 million dwarfs its Korean gross of US $1.3 million.
Among foreign titles, the French hit Taken 2 continued to perform well and has now grossed 2.3 million admissions. Science fiction film Looper opened on October 11 and took a modest 330,000 admissions in its first week. Pixar animated film Brave has done well with younger audiences and has now crossed the 1 million admissions mark.
There were also two notable releases in the specialty market. No Greater Love, a British documentary about a cloistered order of Carmelite nuns, demonstrated the continued strength of religious-themed documentaries in the Korean market. After screening for a week on 25 screens, the film has grossed 6,898 admissions. Documentary Searching for Sugar Man, which recently screened as the opening film at the Jecheon International Music and Film Festival, sold a decent 3,924 tickets in its first week. Finally, Sarah Polley's Take This Waltz continued to perform well in its third week, and has now grossed an impressive 33,098 admissions on a limited number of screens.