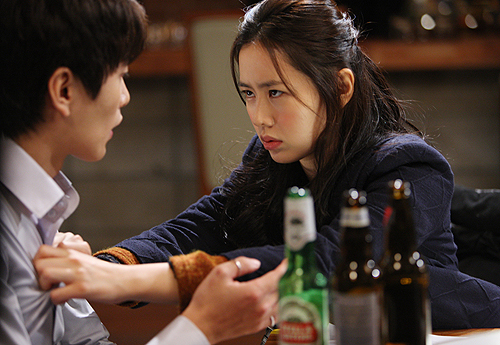 Despite the release of Hollywood blockbusters <The Twilight Saga: Breaking Dawn -- Part One> and Steven Spielberg's <The Adventures of Tintin: The Secret of the Unicorn>, a new Korean film has found its way to the top of the biweekly box office chart. <Spellbound> from debut director HWANG In-ho is a romantic comedy that incorporates some of the conventions of the horror genre. Hallyu star SON Ye-jin takes the lead role as a young woman who, after a near death experience, is tormented by visions of dead people. What's worse is that people close to her also become susceptible to her visions, so she leads a solitary life until one day she crosses the path of a stage magician, played by LEE Min-gi.
Although given a somewhat lukewarm evaluation from critics, <Spellbound> is enjoying strong viewer ratings and has easily outdistanced its Hollywood competitors with 1.6 million admissions in two weeks. The film is released by CJ E&M.
Only two other Korean films managed to hold their place in the Top 10 chart: Korean police thriller <SIU: Special Investigations Unit> at #4, released by Cinergy and Lotte Entertainment, and the long-run hit <Punch> at #5. <SIU>, about an elaborate plot uncovered by the death of a policeman, sold another 500,000 tickets in its second and third weeks to bring its total to a respectable 1.08 million admissions.
Meanwhile <Punch>, which has been on release since Oct. 20, boosted its total to a very impressive 5.26 million admissions (roughly US$33 million) for CJ E&M. The film was also recently invited to screen in the Generation 14plus section at the 2012 Berlin International Film Festival.
Two anticipated Korean releases are scheduled to hit theaters on Dec. 21 and their performance in preview screenings placed them onto the extended top 10 list for Korean films. <Perfect Game> is a baseball movie based on two legendary real-life pitchers, CHOI Dong-won and SEON Dong-yeol. It will go head-to-head with the blockbuster-scale war movie <My Way> by well-known director KANG Je-kyu (<Taegukgi>), making for an eventful end of the year at the box office.
Dec. 15, 2011
Any copying, republication or redistribution of KOFIC's content is prohibited without prior consent of KOFIC.
Related People Related Films Related Company