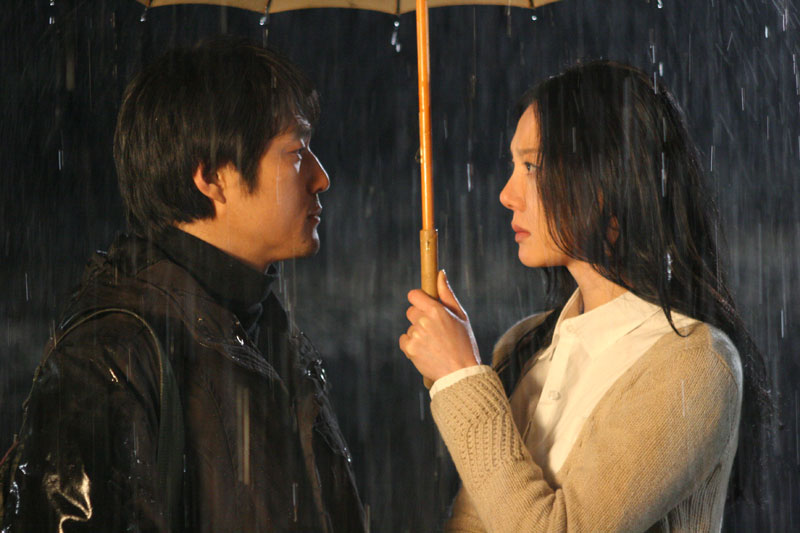 Romance meets politics in renowned director IM Sang-soo's latest film The Old Garden, one of the first local releases in 2007.  The story of a doomed love affair, set against the backdrop of the tumultuous 1980's when university students risked their lives and happiness in the struggle for democracy, is slated for nationwide release on January 4th.  It was previewed to the public on December 26th, as the opening film of the University Film Festival, which will showcase student films from over 60 Korean universities as well as major overseas film schools.

Adapted from a best-selling novel by Hwang Suk-young, The Old Garden retells the story of democracy activist Hyun-woo (played by JI Jin-hee) and a young public school teacher Yoon-hee (YEOM Jeong-ah). Six months into their relationship, the couple are torn apart when Hyun-woo joins a student activist group and is arrested almost immediately and sentenced at a farcical trial to life imprisonment.  The film is set in Gwangju around the events of the Gwangju Massacre, which made international headlines, shocking the world.

While the political backdrop and its events are an important part of the tale, IM has decided to focus on the love element and the notion of loyalty in particular, as the film narrows in on the experience of a woman abandoned by her boyfriend. IM has long been concerned with a woman's perspective in a rapidly changing society.  His sophomore effort Tears (2001) examined the lives of teenage girls working in the room salon industry.

The Old Garden forms the centerpiece in what is emerging as a triptych on Korean history.  His previous film The President's Last Bang (2005), was set in 1979, and focused on the assassination of dictator PARK Chung-hee.  His third film, A Good Lawyer's Wife (2003), looked at contemporary Korea and changing values within the cherished institution of marriage.  The new film is set between these two periods, and the films viewed together make for an interesting overview on Korean society in the last 25 years.

Never a stranger to controversy, IM's The President's Last Bang was the victim of political censorship, when the son of dictator PARK Chung-hee waged a lawsuit on grounds of defamation, resulting in 3 minutes and 50 seconds being cut from the film. The lawsuit was eventually overturned and the film restored to its original length for a special screening at the Pusan International Film Festival in October, 2006.

The Old Garden is IM's fifth feature film, and had its World Premier in September at the 54th San Sebastian International Film Festival, held annually in northern Spain.  Director IM is no stranger to appreciation on the international festival circuit, with previous films The President's Last Bang invited to Cannes, Toronto, New York and Melbourne film festivals, and A Good Lawyer's Wife in competition at the Venice International Film Festival.

IM was born in 1962 in Seoul and studied Sociology at Yonsei University.  He went on to study film at the Korean Academy of Film Arts and in the same year worked as assistant director for PARK Jong-won's Kuro Arirang (1989). He made his feature debut as writer-director of Girl's Night Out (1998).

His future project, A Good Woman in Paris, pending financing, will be shot entirely outside of Korea, where IM, often limited by censors in his home country, says he will be free topush his filmmaking to its limits.